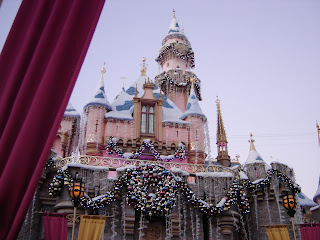 Tim’s company Christmas party was held at the ESPN Zone in Downtown Disney, Saturday night, so we went a little early to spend some time in Disneyland. It was too crowded to go on any of the rides, but we did enjoy seeing the grounds all decorated for the holidays. The castle was especially spectacular this year, all covered in enormous garlands and faux snow.

We rode the monorail into the park and then wandered over to Fantasyland. We were strolling toward Frontierland when I spied a tall man dressed in purple robes and a pointy hat.

“It’s Merlin!” I yelled and dragged Tim over to the sword-in-the-stone monument next to the King Arthur carousel. Everyone who knows me knows I’m fanatical about all things Arthurian, so it was no surprise that I knew exactly where Merlin was headed. It was time for him to crown a new monarch of the realm and I wanted a front-row view.

The test, of course, was whether anyone could actually pull the sword from the stone (er, anvil). To pick the most likely candidate, Merlin fished a divining rod out of his bag and aimed it at a several people in the audience. He moved from one person to the next, until he finally settled on . . . Tim!

“Oh no,” he groaned as he joined Merlin on the impromptu stage. 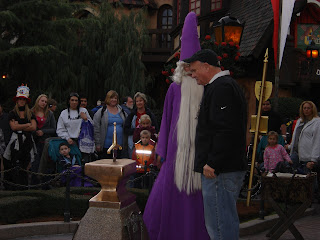 “To become the next ruler of Camelot, you must remove the sword from the stone!” Merlin implored. But try and try as he might, my husband just wasn’t kingly enough and so was directed to stand to the side as Merlin looked for another candidate. 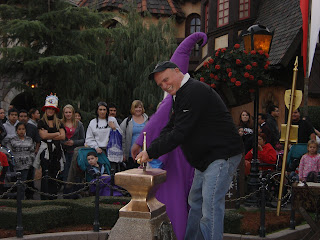 Meanwhile, Tim, who normally hates being the center of attention, played to the audience by mugging and flexing his muscles. The little girl standing next to me thought he was a riot; I just rolled my eyes. 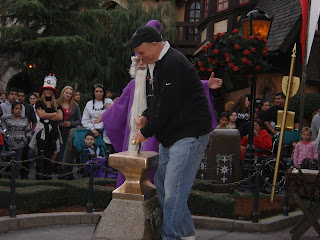 By now, another victim had been selected: an eight-year-old girl who handily lifted the sword from the stone. Merlin shot Tim a look of disgust as he sheepishly hung his head.

But Tim had the last laugh.

“Merlin smells like cigarettes,” he conspiratorially whispered in my ear afterward.

So much for the "one brief shining moment" that was Camelot!