From One Extreme To The Other 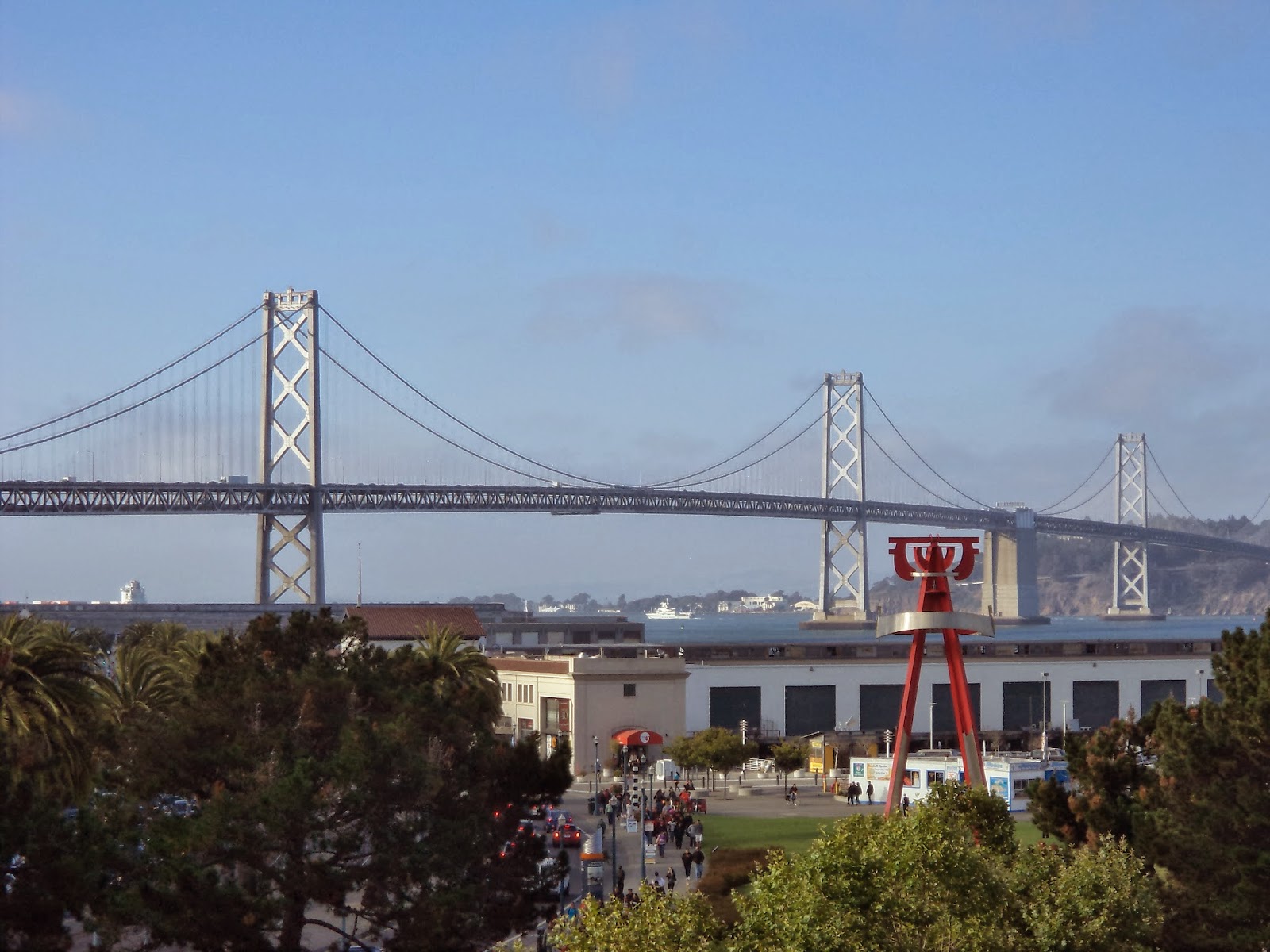 The San Francisco Bridge from AT&T Park
After driving home from Las Vegas (see below), we spent one day recuperating at home before hopping a plane to San Francisco for a couple of days. We stayed at my new favorite SF hotel, the Serrano—old world charm, located just five blocks from the Powell St. BART and Muni station. We took mass transit everywhere—always a nice change for us car-addicted Angelenos. 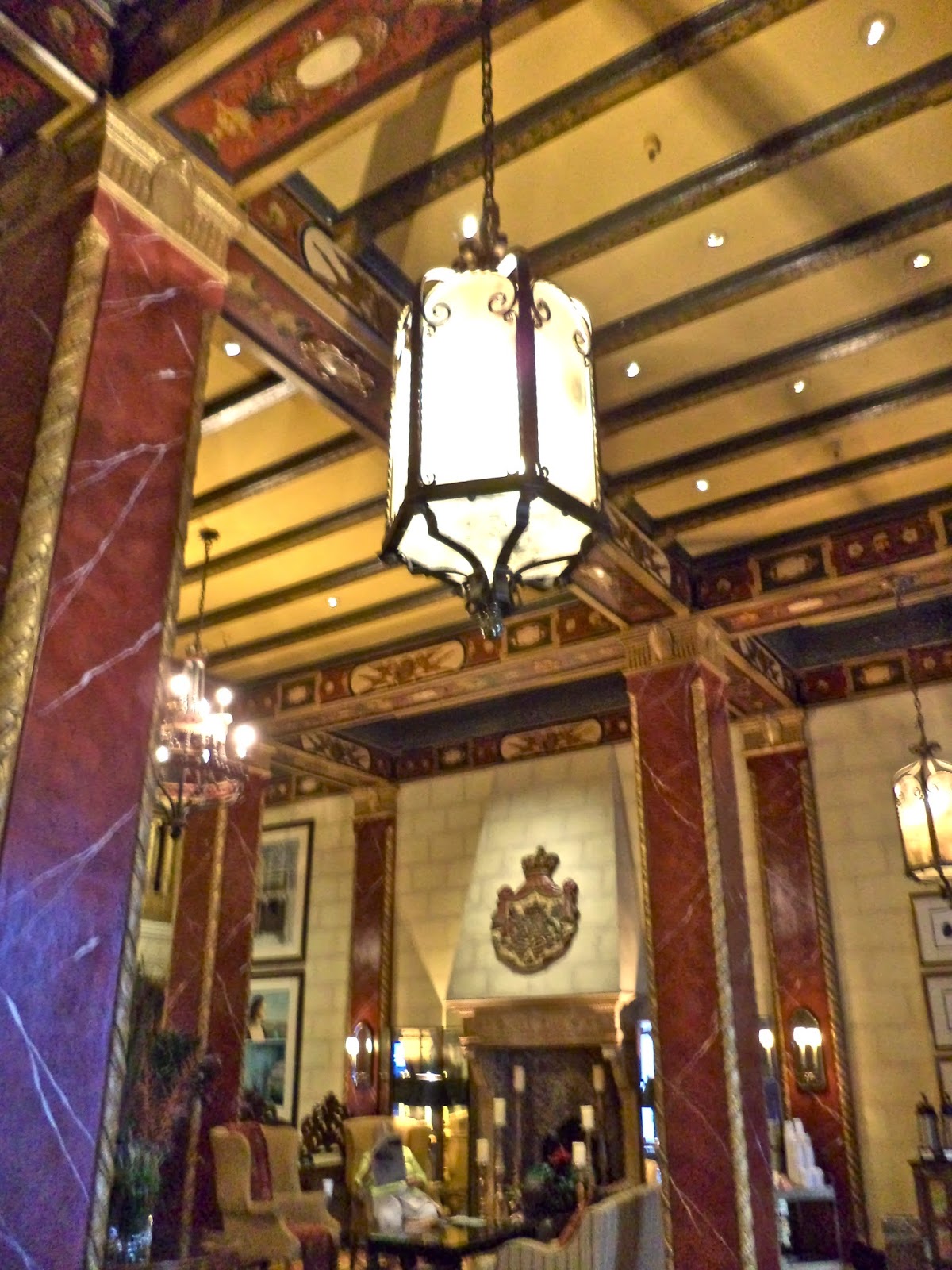 The Serrano lobby
Our first stop was AT&T Park to see a Giants game. Growing up in L.A., I never liked the Giants, the Dodgers' national league rivals. Still, even I have to admit that their stadium, built in 2000, is spectacular and may indeed have the most beautiful ballpark setting in the country, as the Giants claim. But it was cold, especially after the oppressive heat of Las Vegas. Quite a difference in temperatures as well as cultures, if one can say that Vegas has any culture. 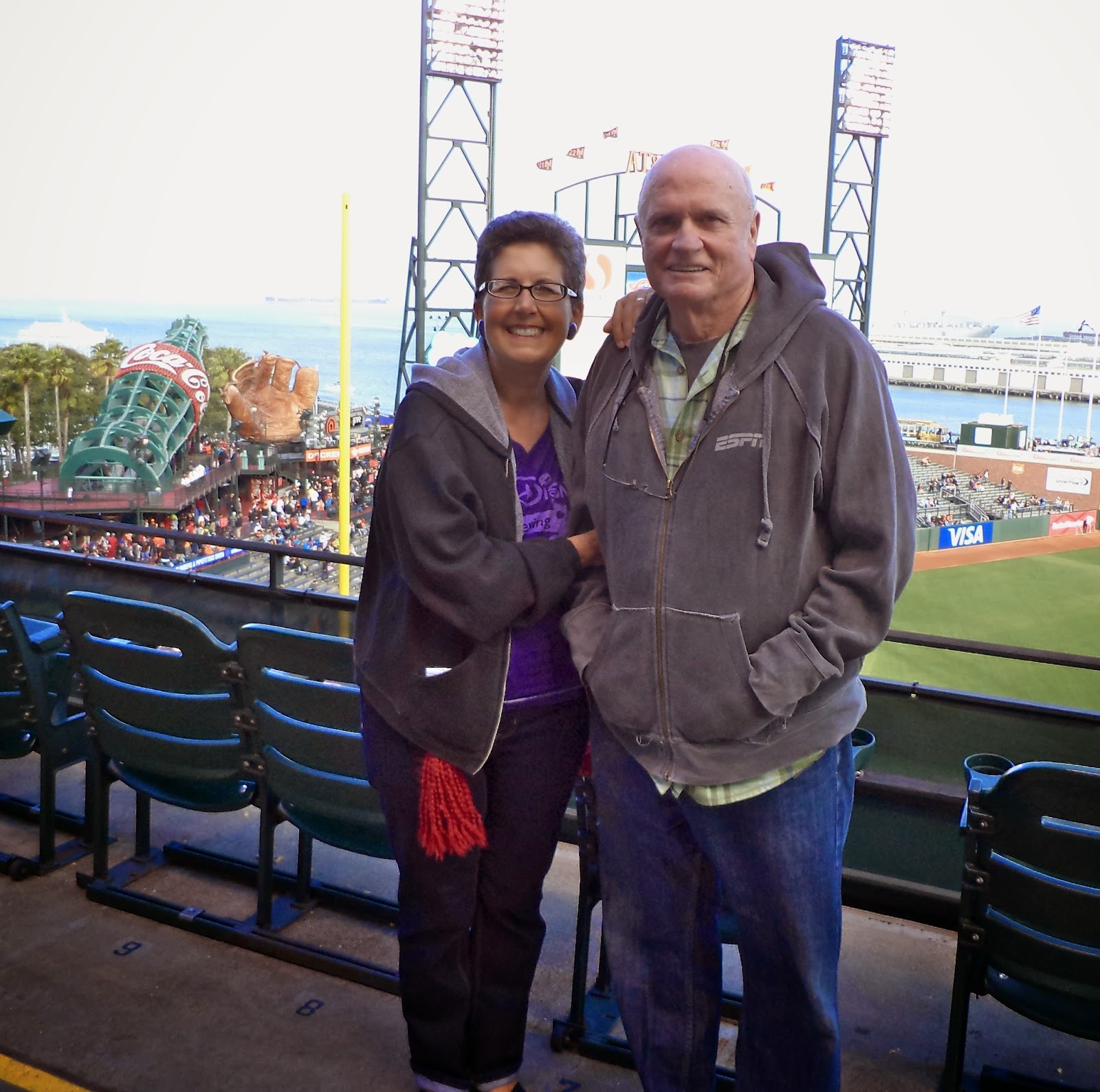 Bundled up to watch baseball—note my red wool scarfpeeking out from under my sweatshirt! 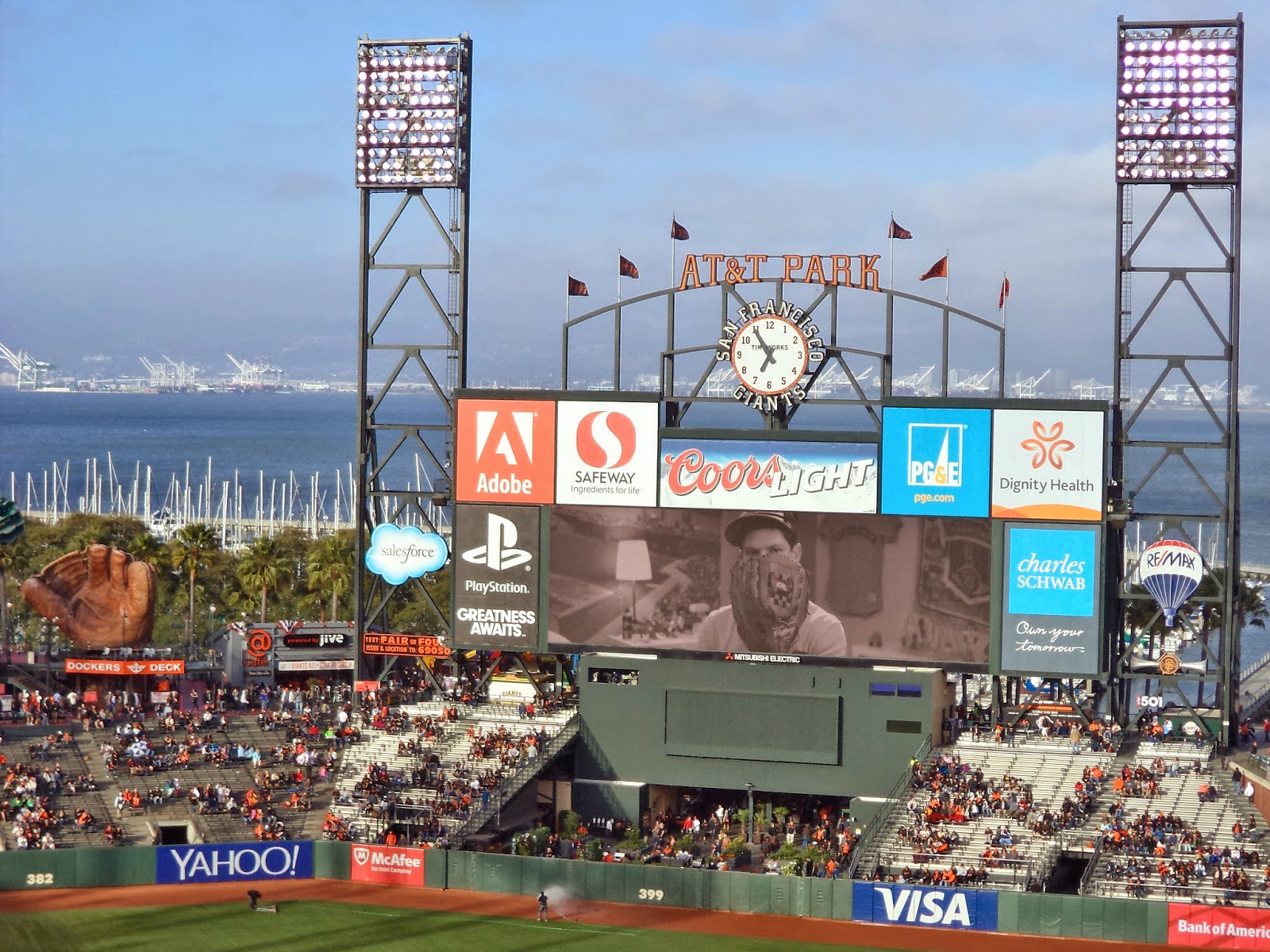 The view of AT&T centerfield from our seats 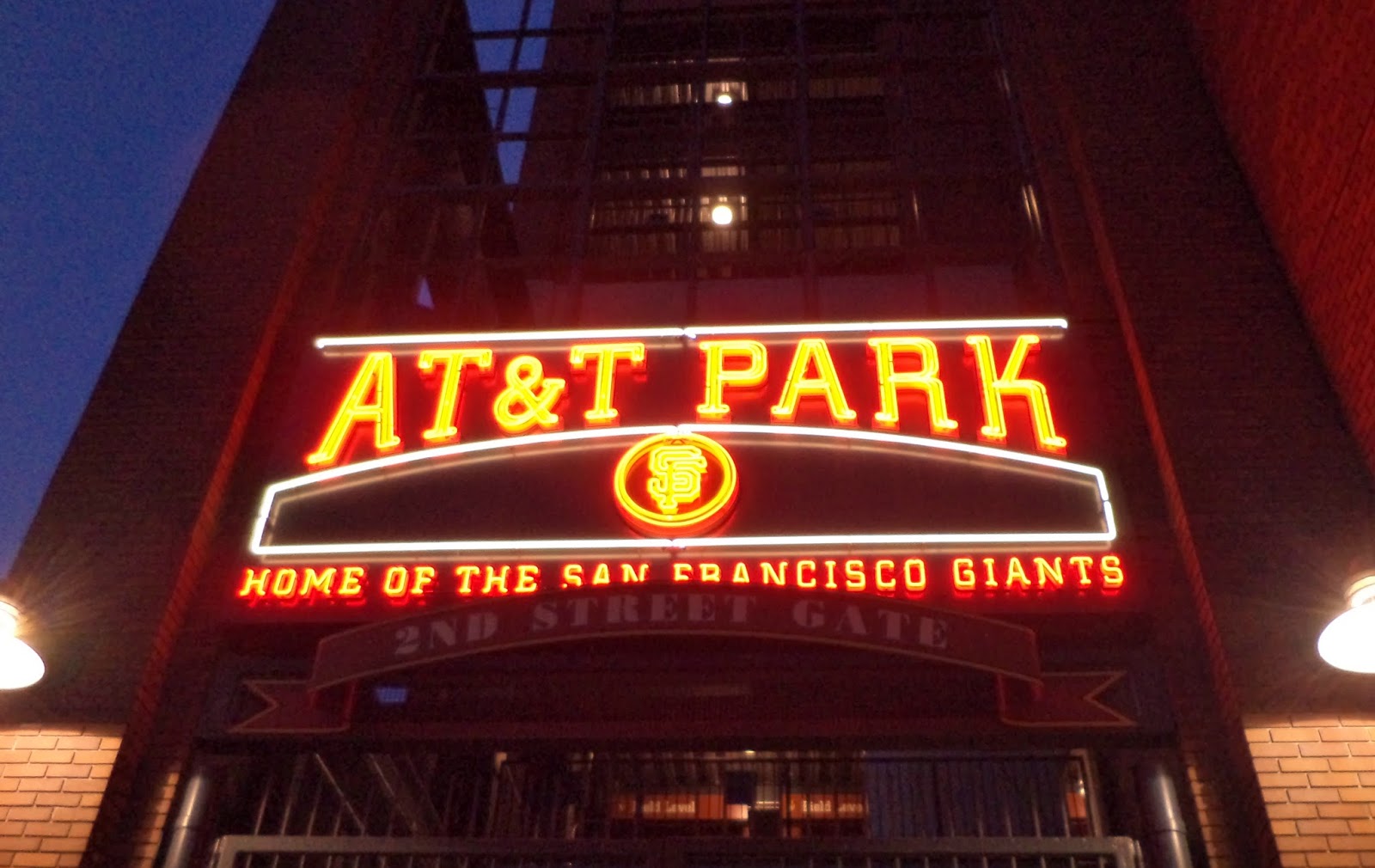 The next morning, we decided to see the recently renovated Coit Tower, which sits atop Telegraph Hill in North Beach. Completed in 1933, the landmark tower houses an array of Depression-era murals commissioned as part of the Public Works of Art Project in the 1930s. To get there, we caught an old Italian trolley car on Market St. and took it to Greenwich St., off of Embarcadero, before then climbing some 400 steps (!) to Coit Tower. The views were worth it, as we panted up more than 400 feet to the summit. But, damn, what a hike for our poor old legs! Next time we'll take a bus. 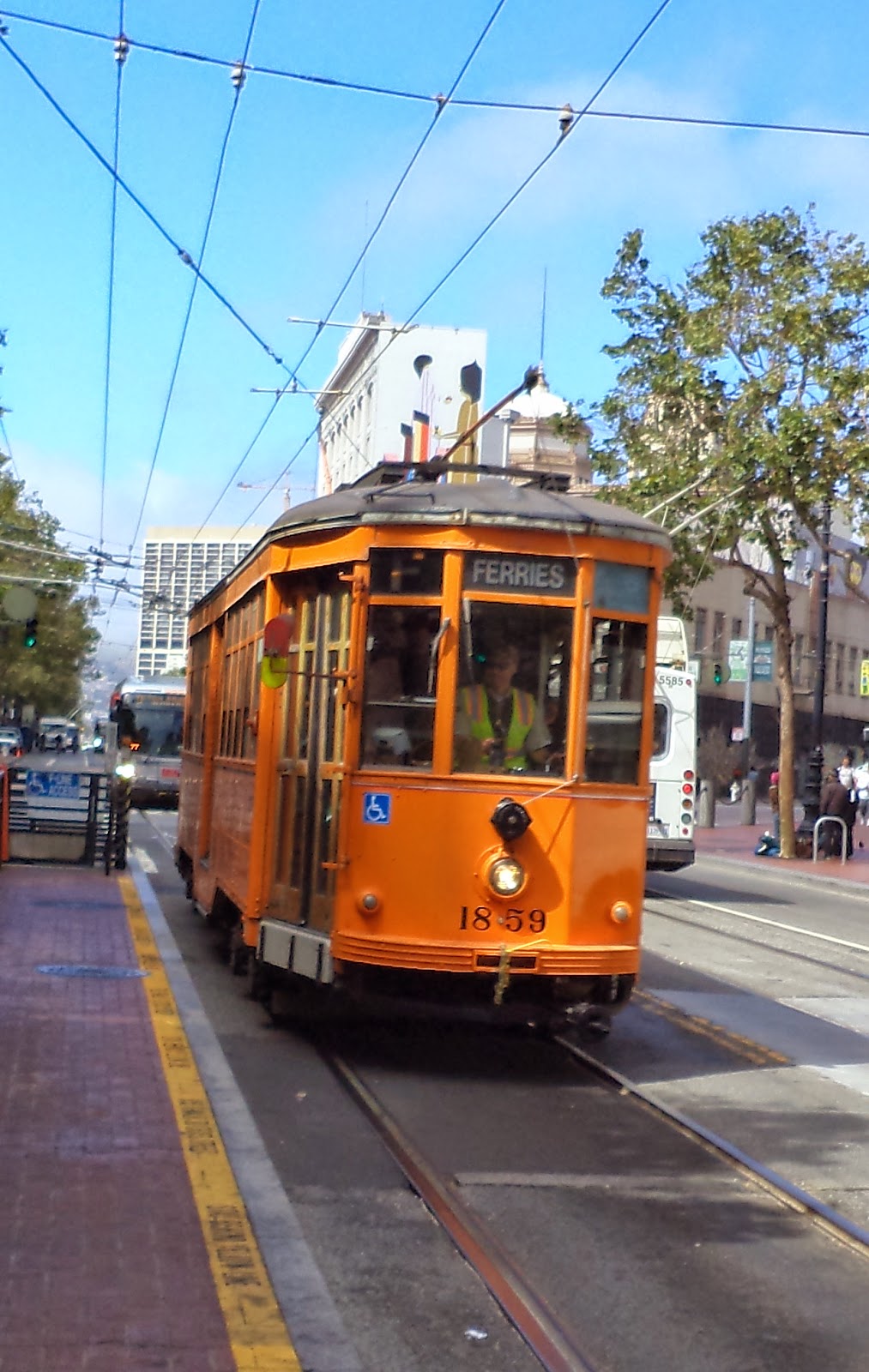 Our ride to Embarcadero 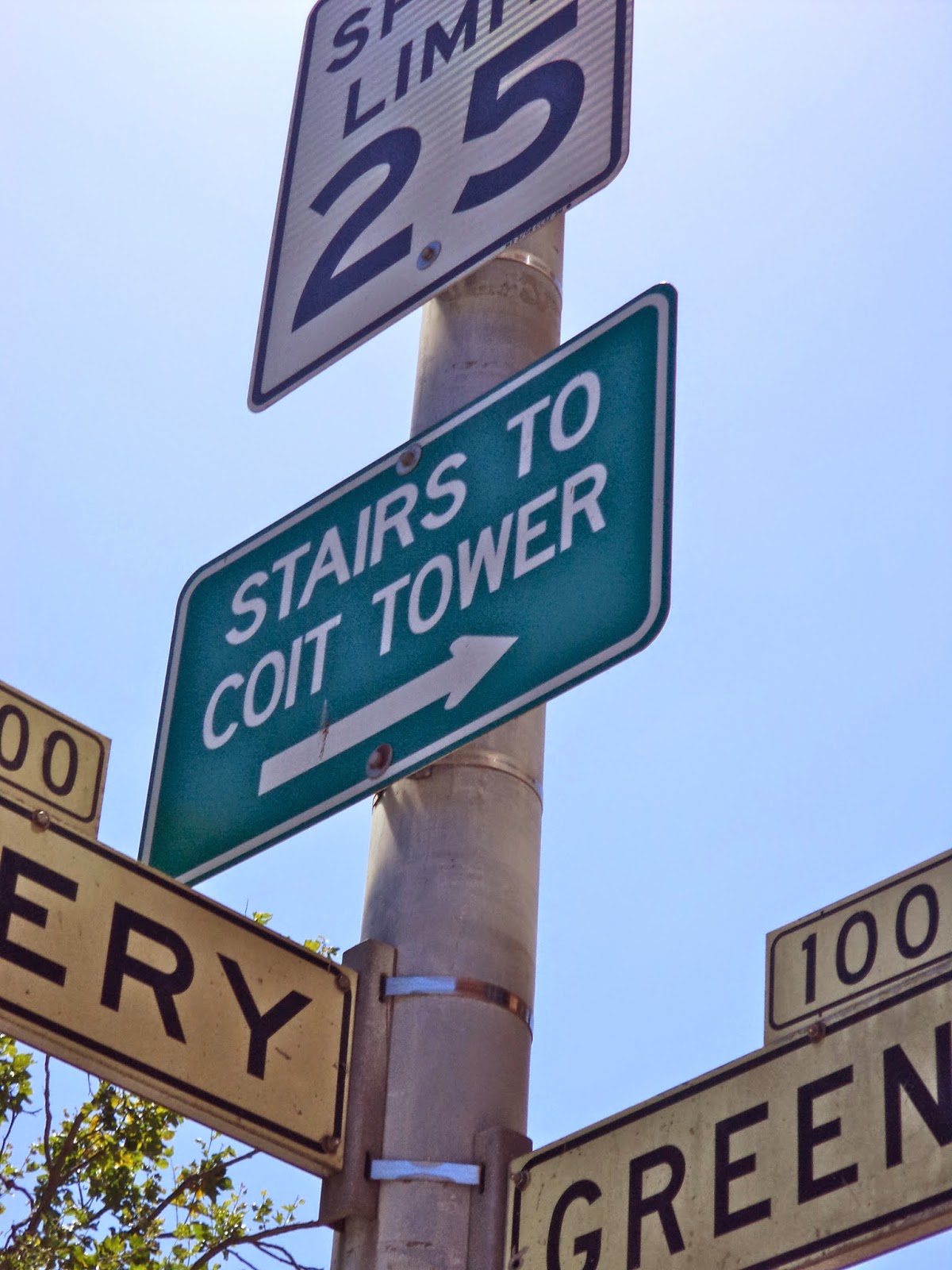 Beware, all who enter here! 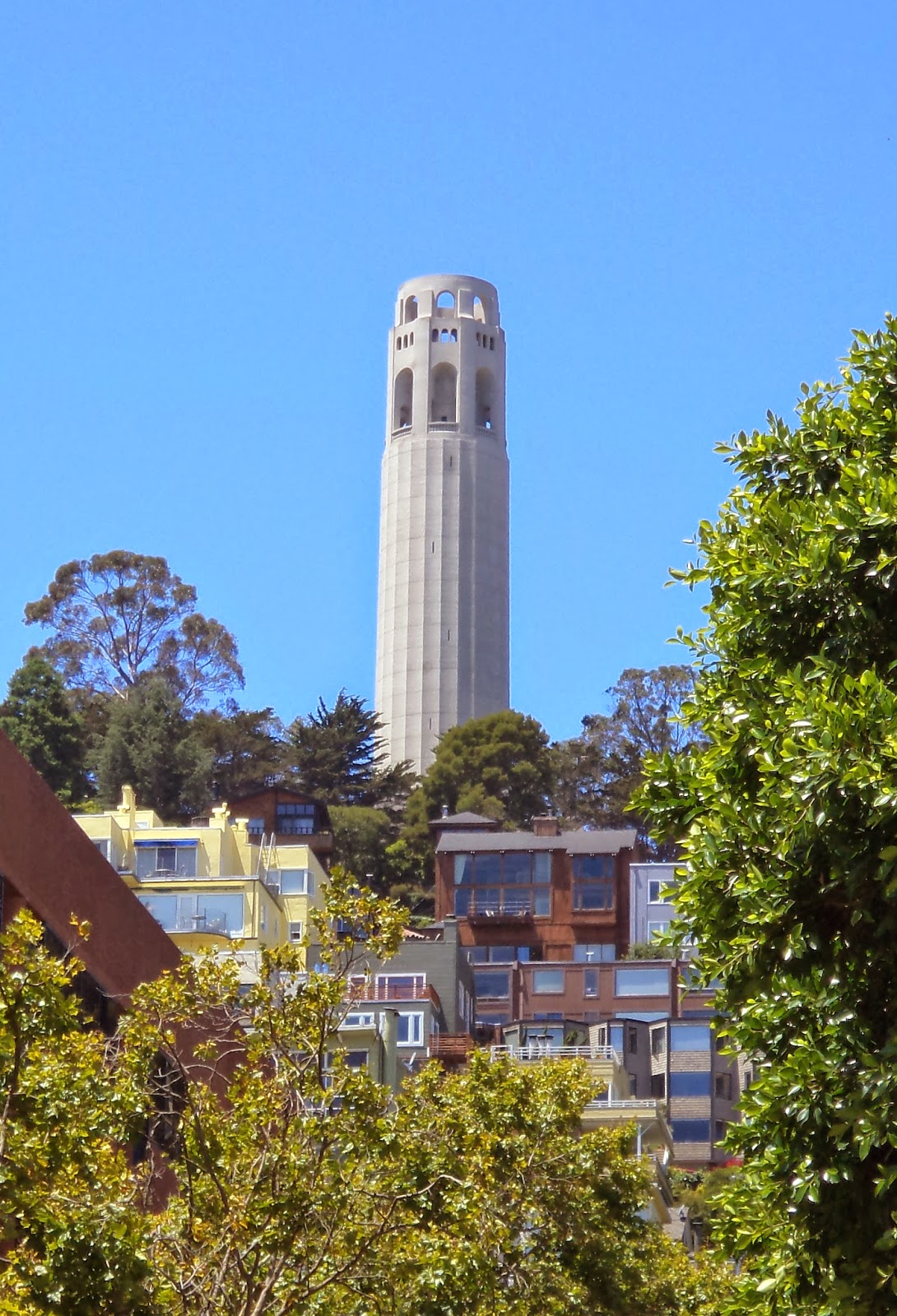 Our destination—so close, yet so far 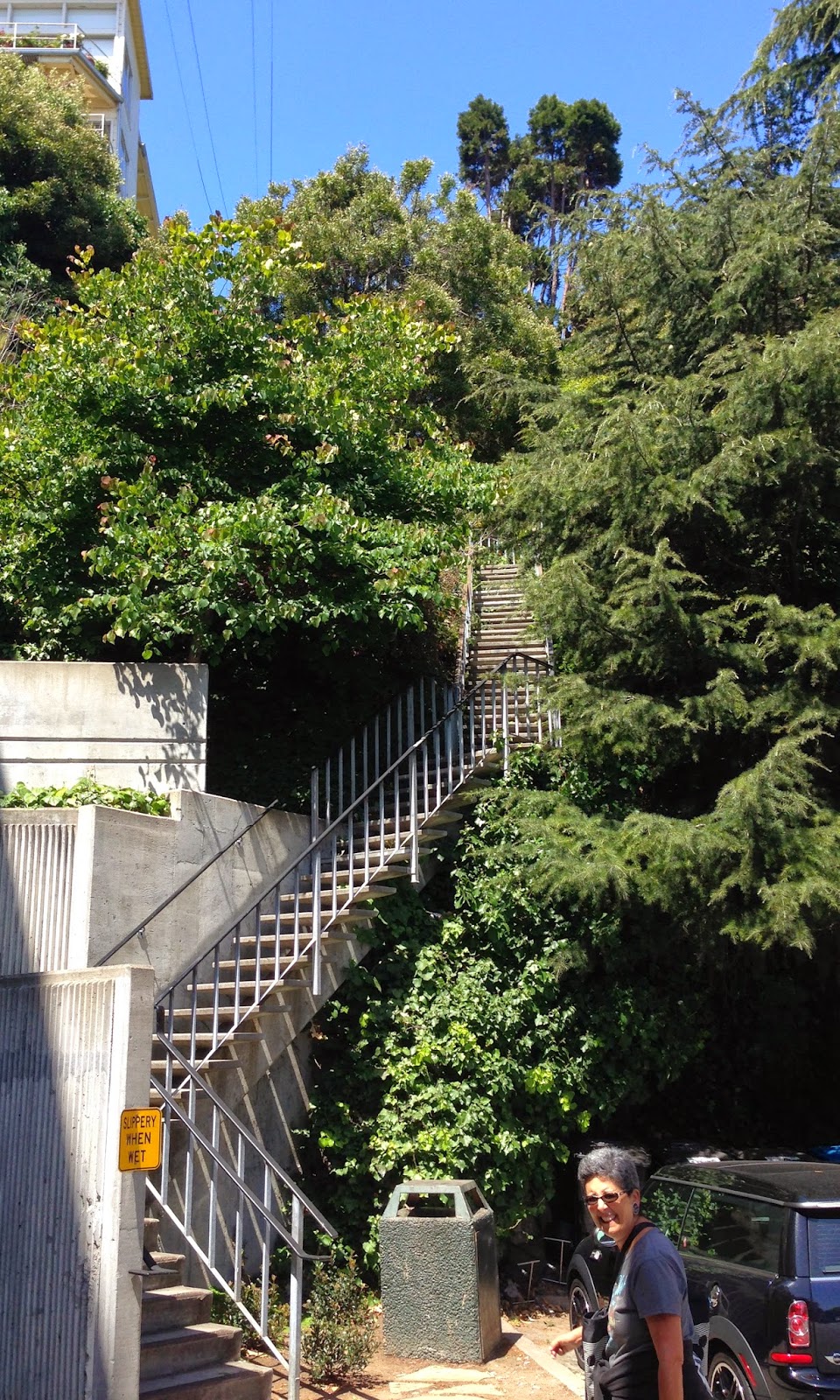 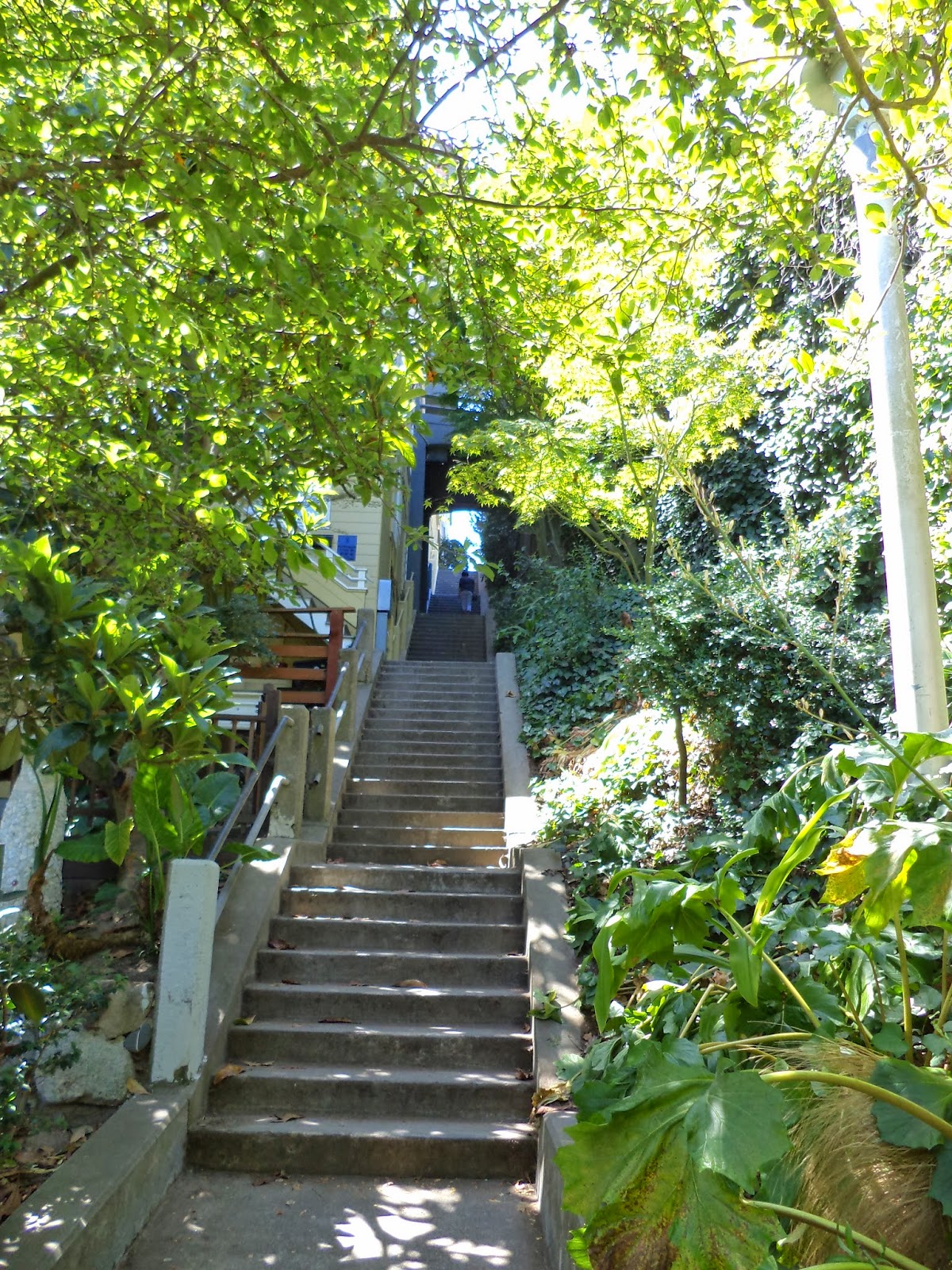 Up and up we go—at least it was mostly shady 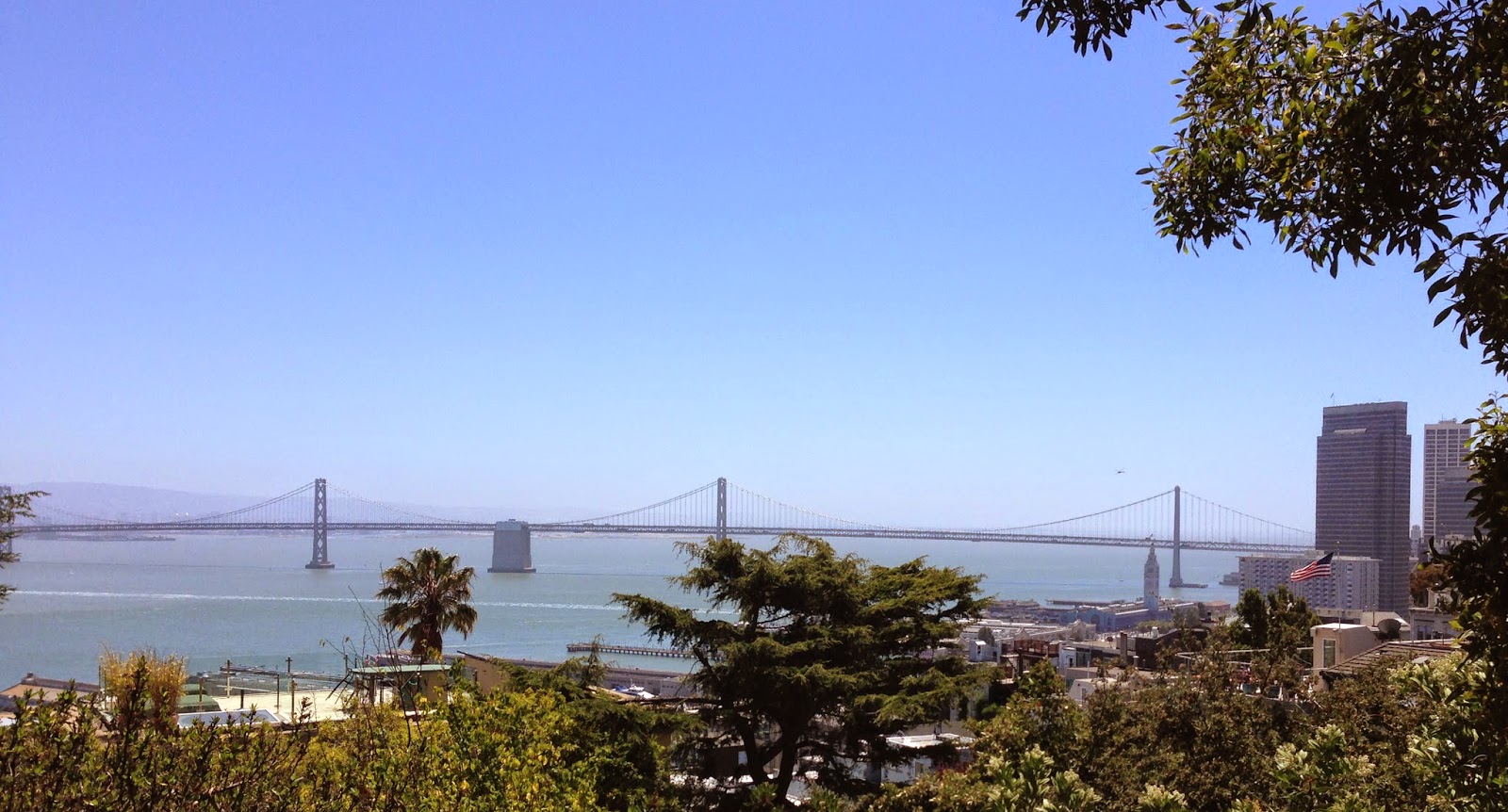 The magnificent view along the way 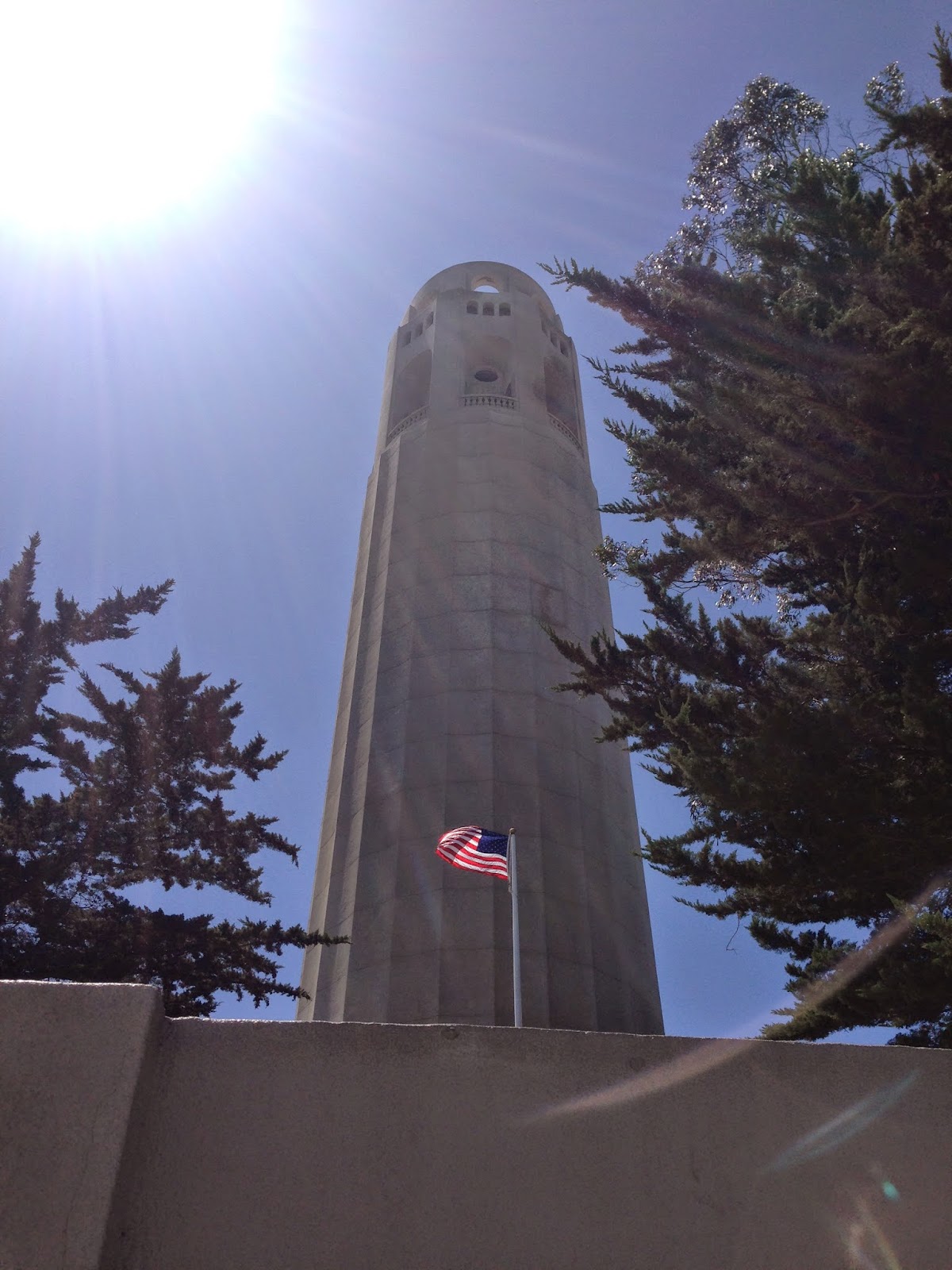 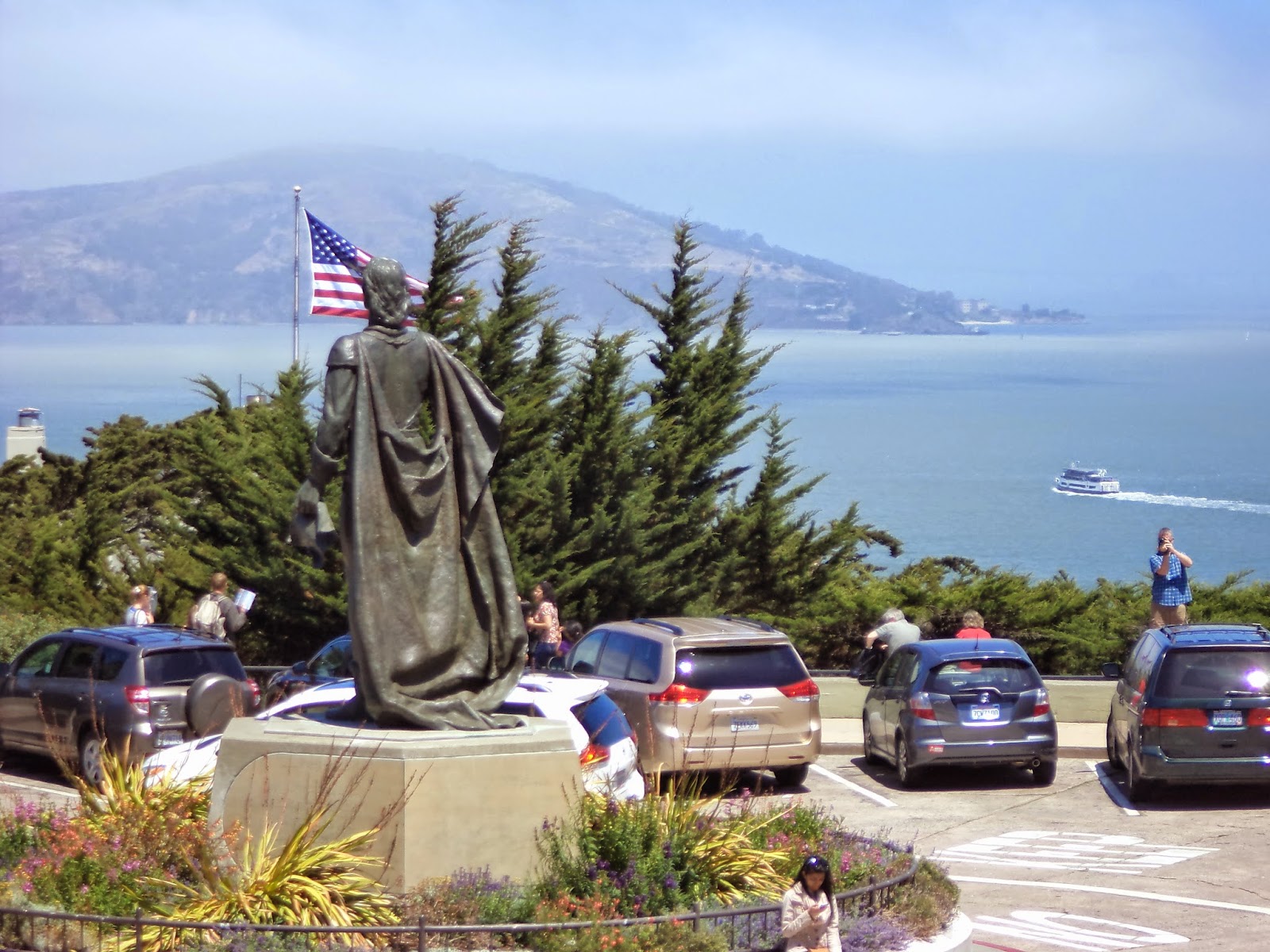 A statue of Columbus overlooking the Bay 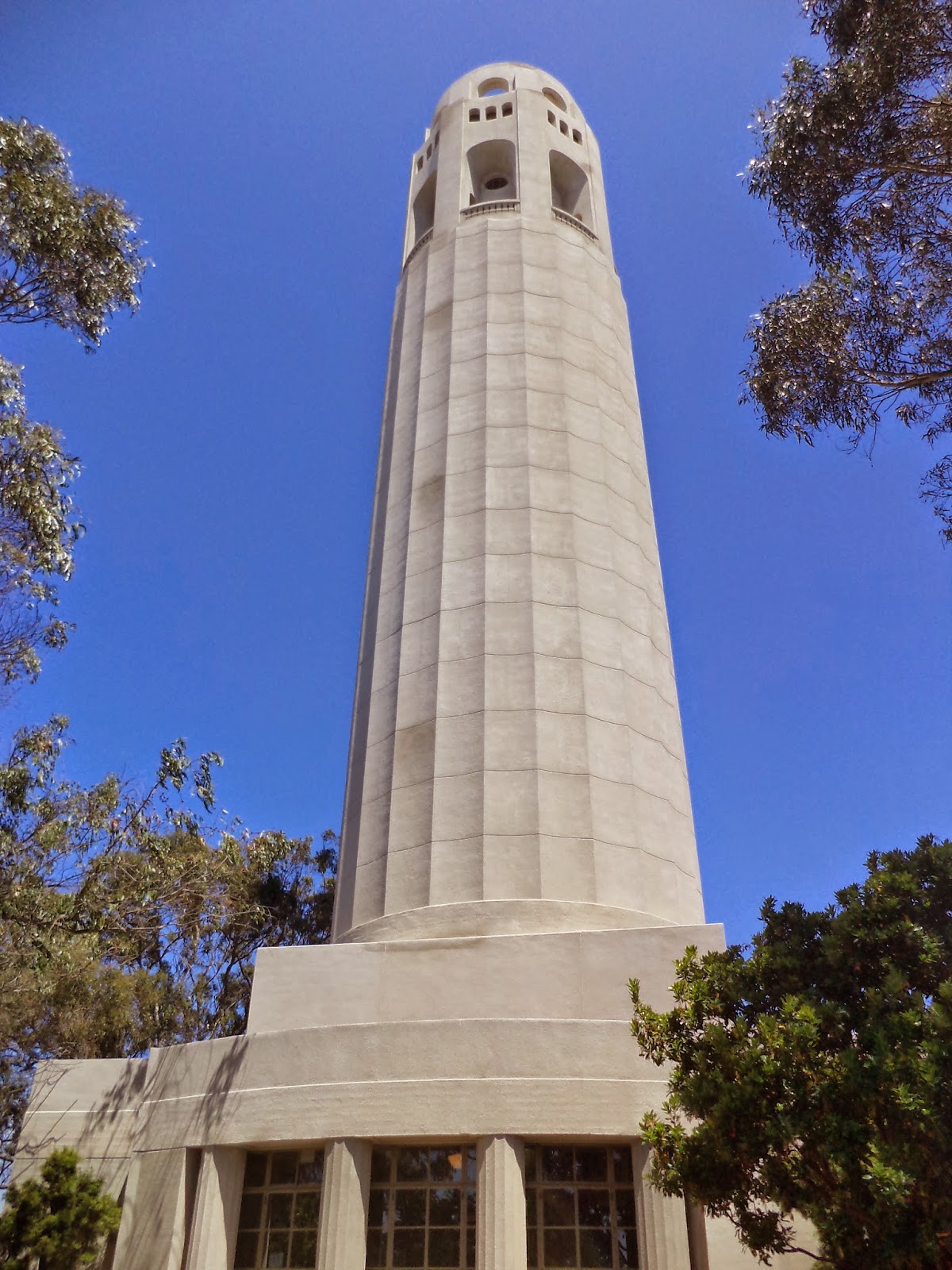 The back of the tower 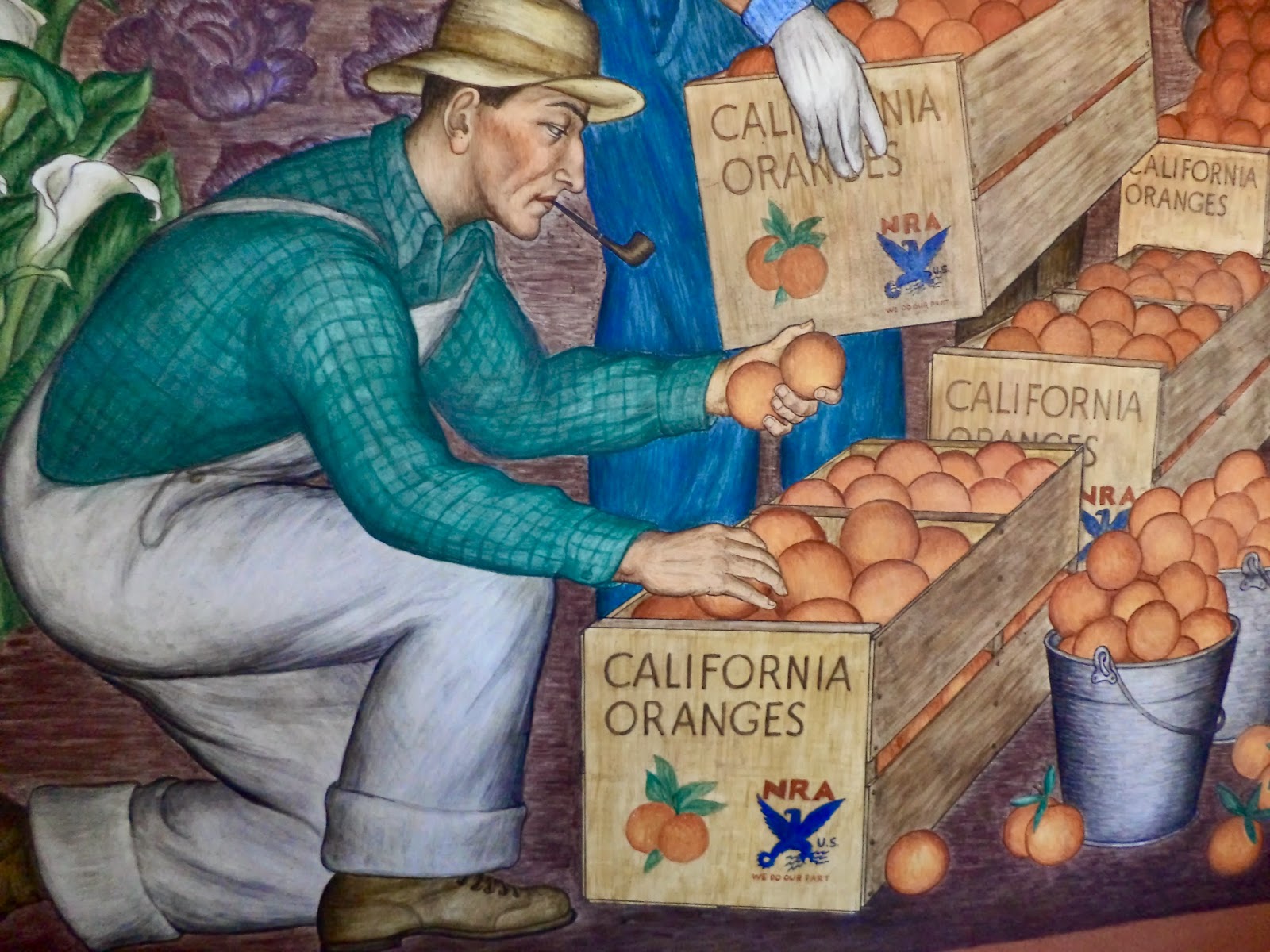 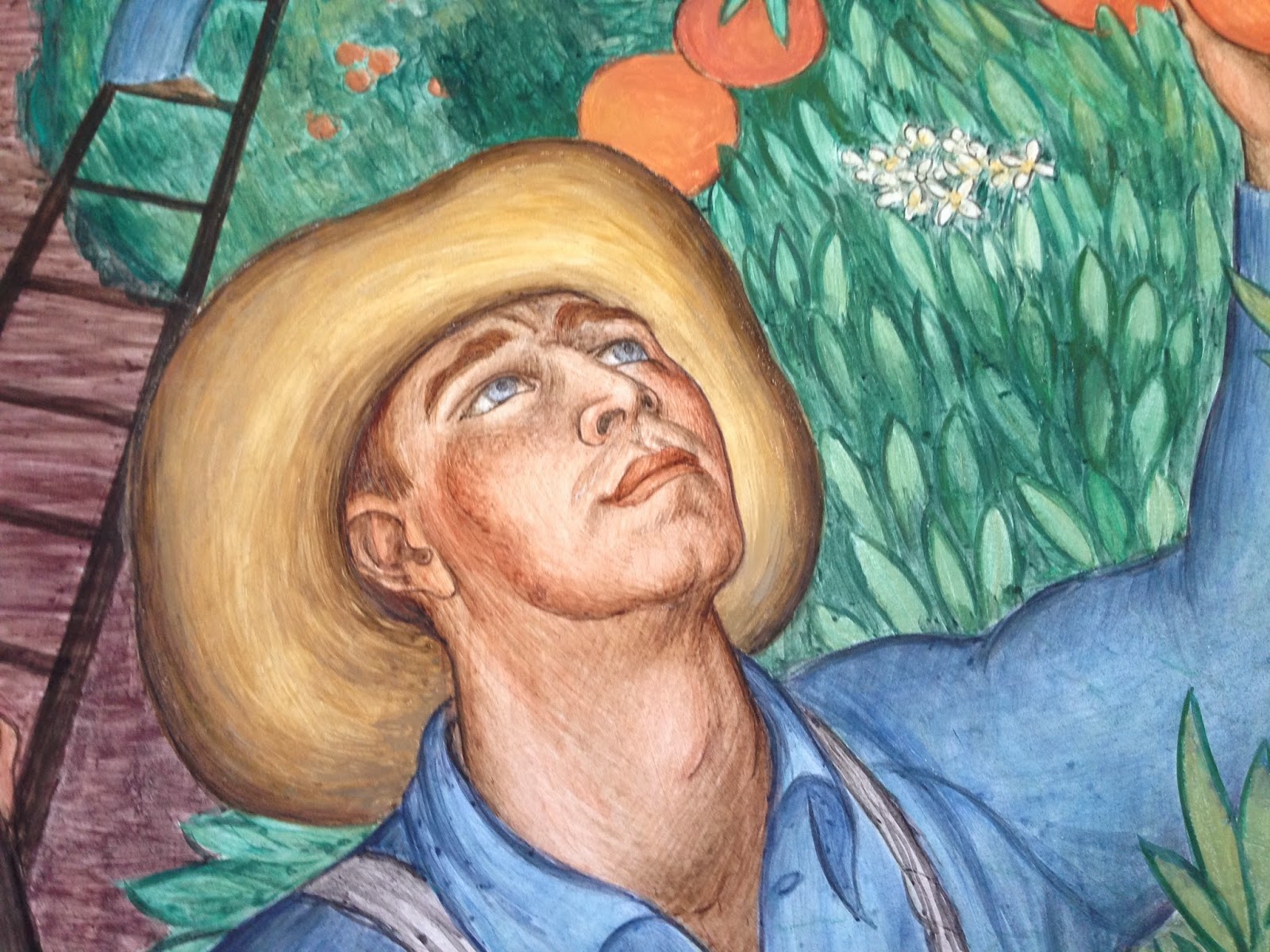 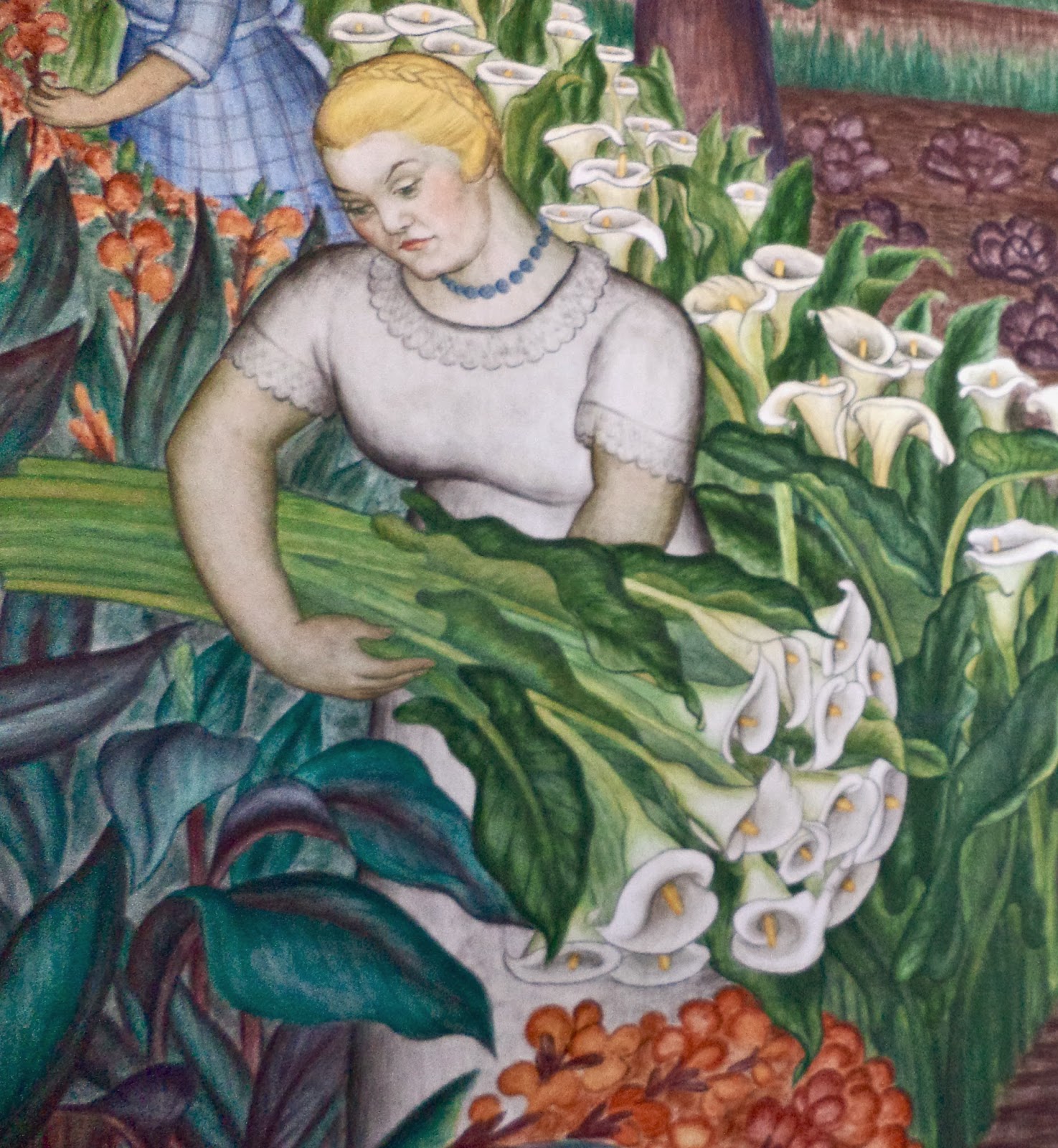 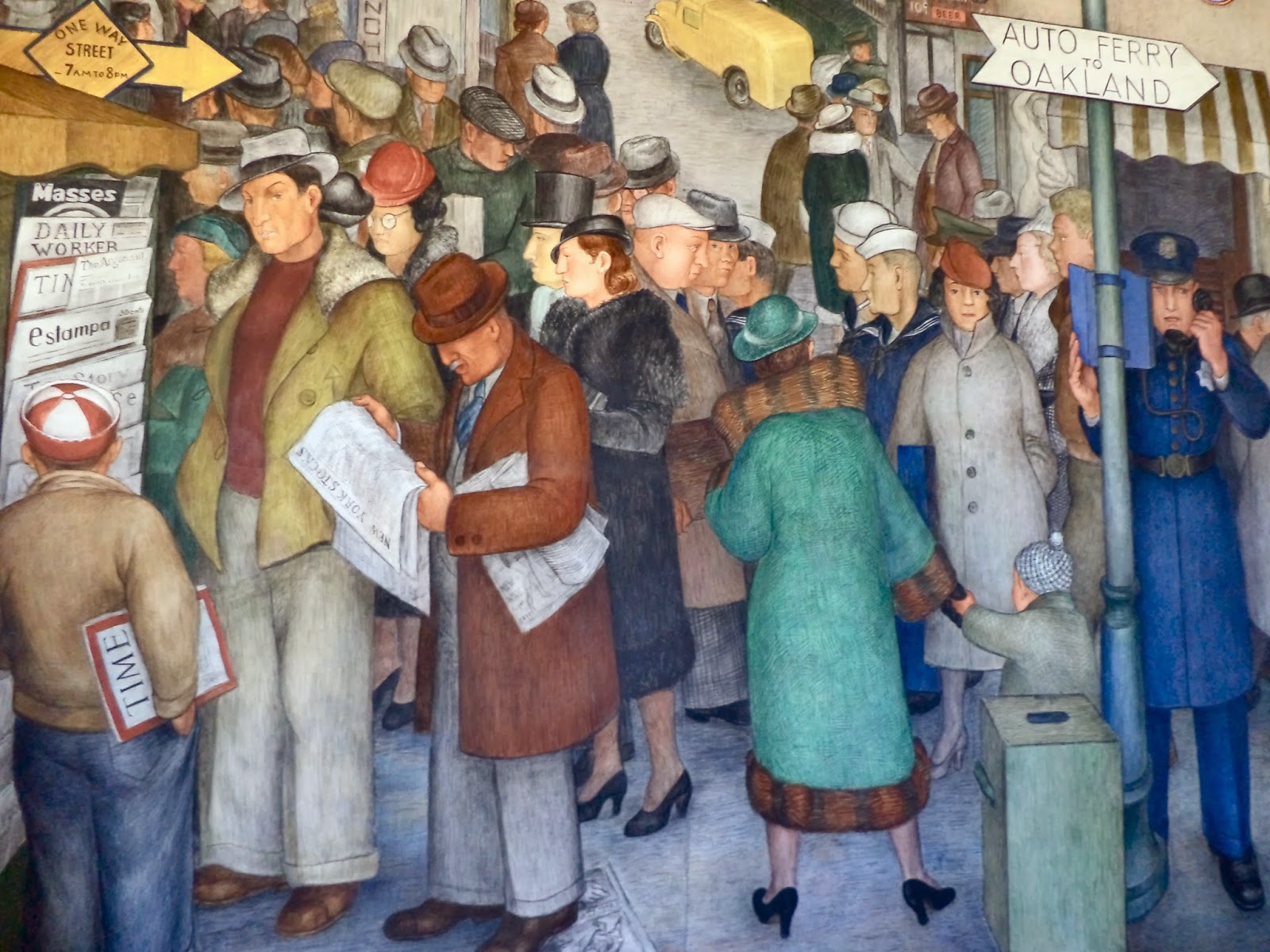 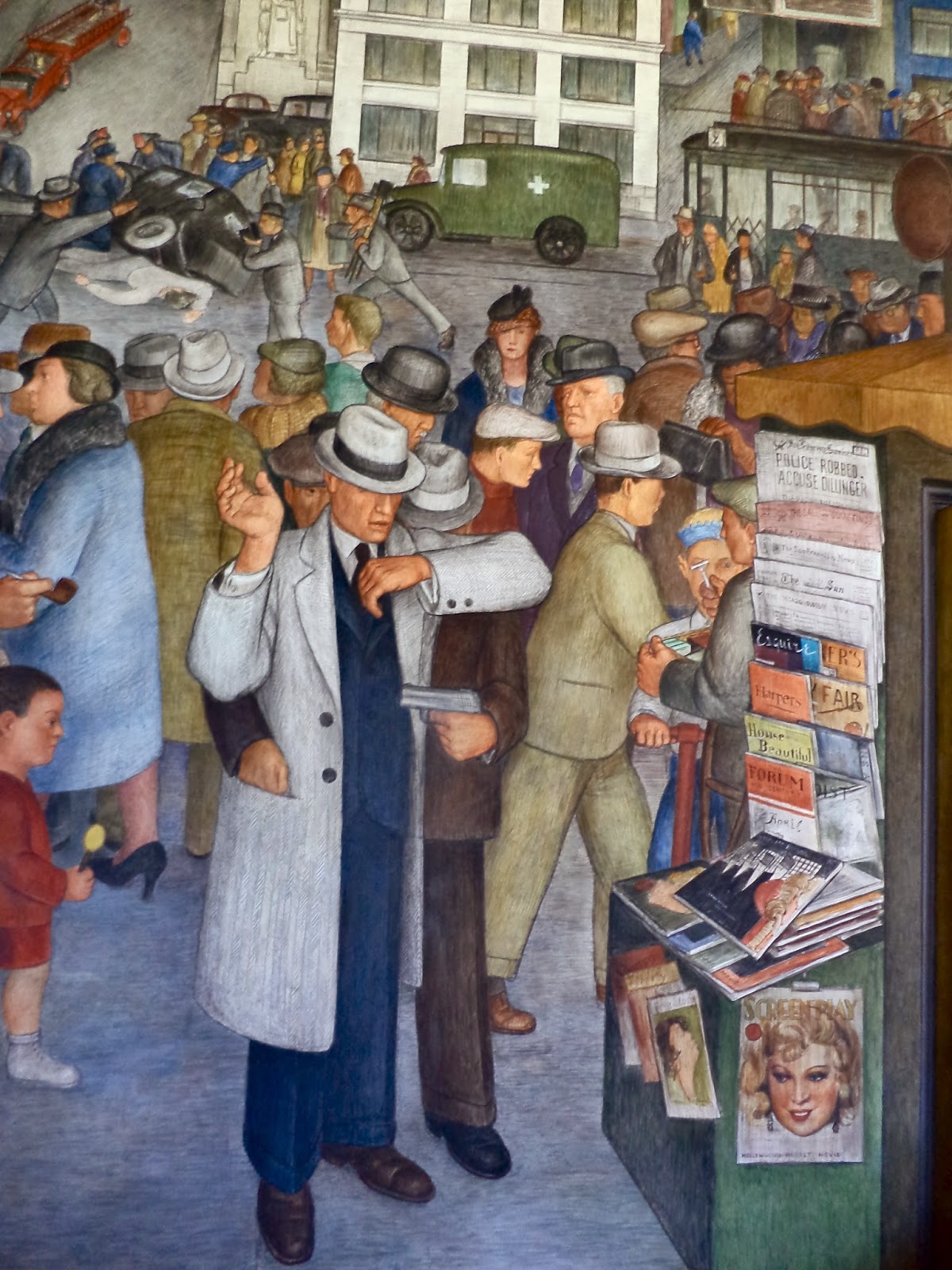 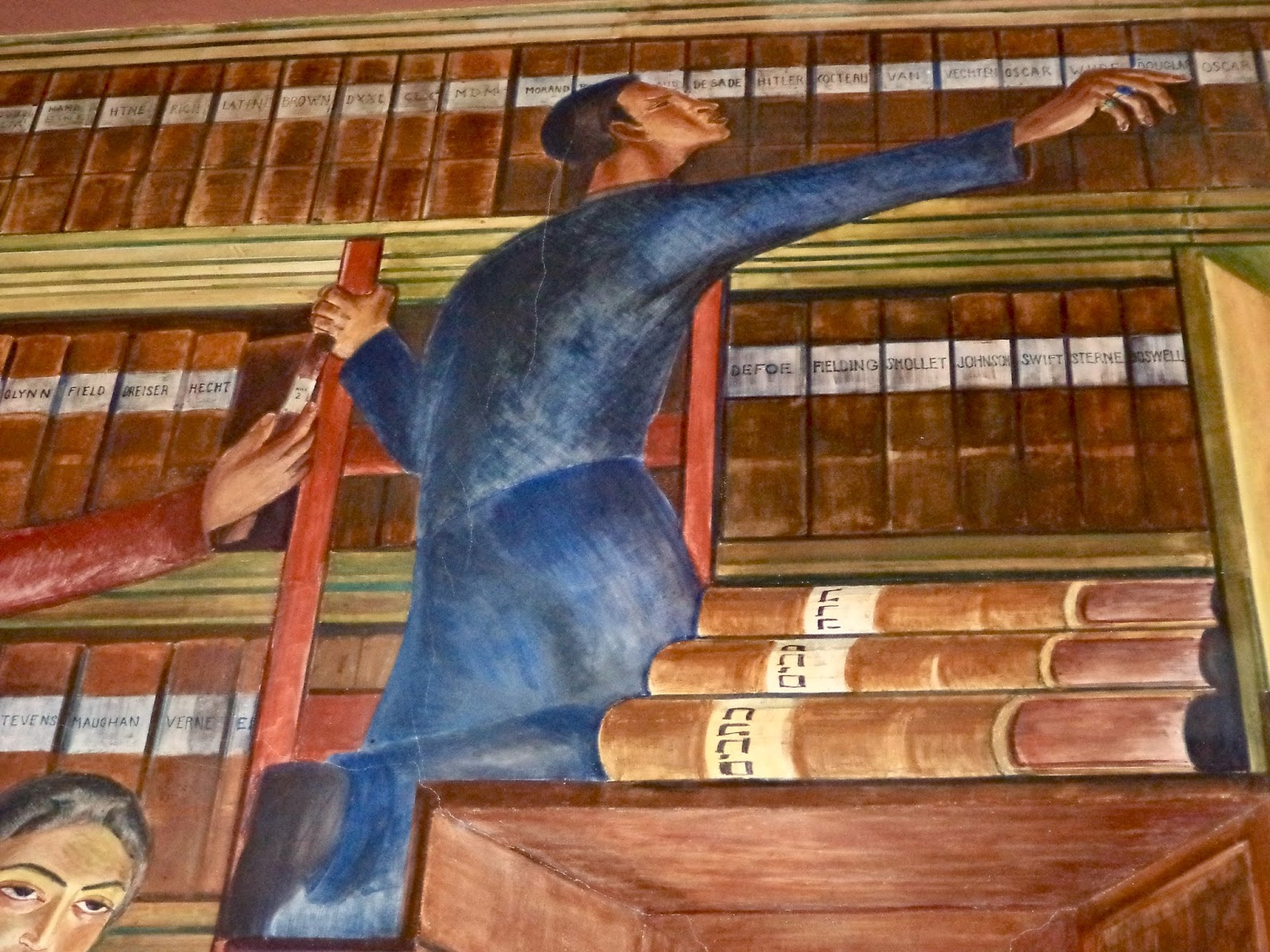 My favorite panels: The Library—shelving books 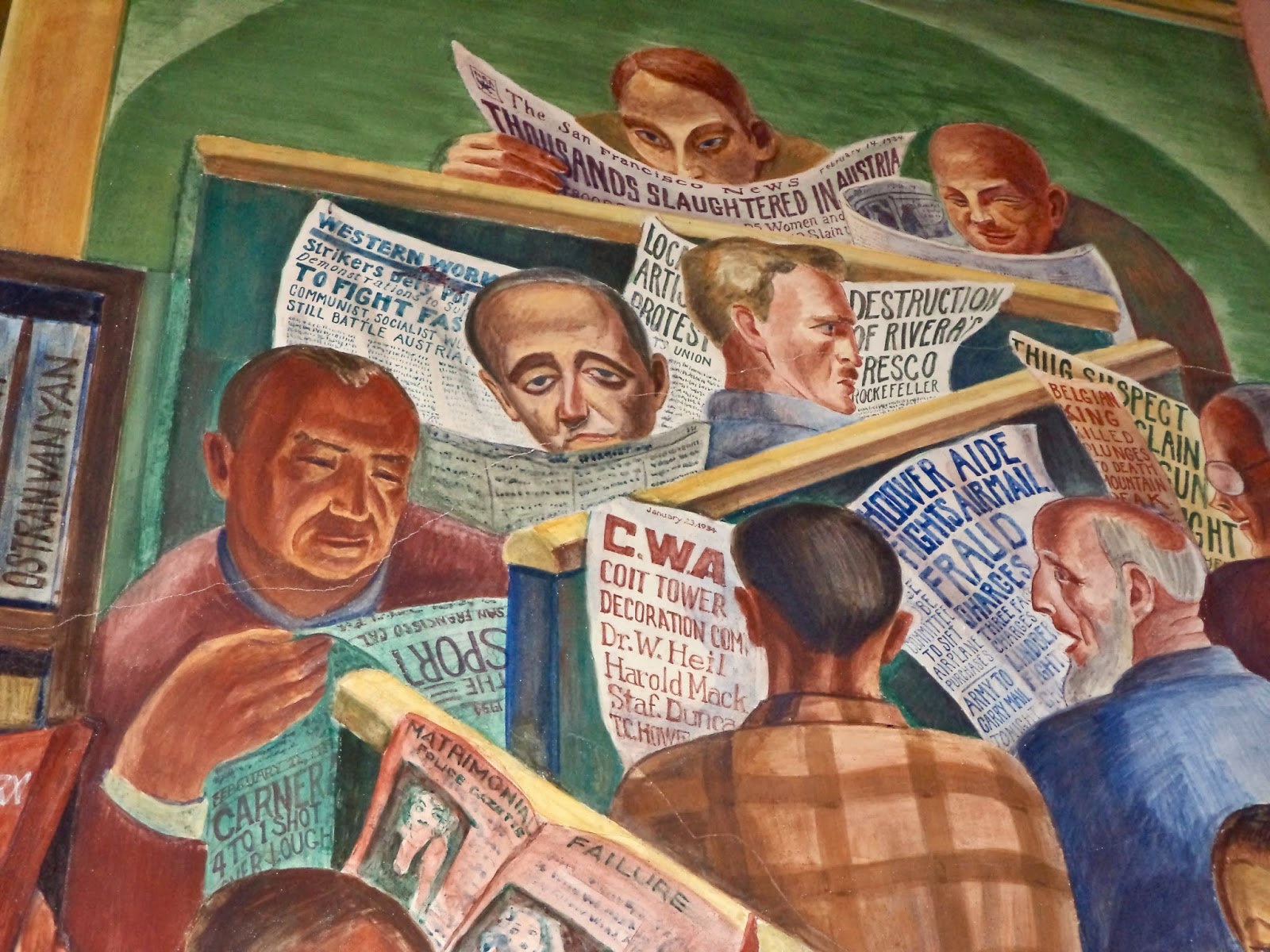 Marxist headlines in the library: "Hoover Aid Fights Airmail
Fraud," "Destruction of [Diego] Rivera's Fresco at
Rockfeller Center," "Thousands Slaughtered in Austria"
We did take the free bus, a few hours later, to the Presidio, where we visited the Disney Family Museum, which I saw and loved the last time I was in SF. Coincidentally, the Presidio was also the site of Off the Grid, a weekly family picnic event that features food trucks (one of our favorite things!), 5-9PM every Thursday night. I knew Bacon Bacon from a previous trip to SF and so made a beeline straight for their scrumptious BLT sandwich. We then jumped on the bus and the Muni subway back to the hotel and quickly fell asleep. We were back home the next day—July 4th—well before fireworks and BBQ. 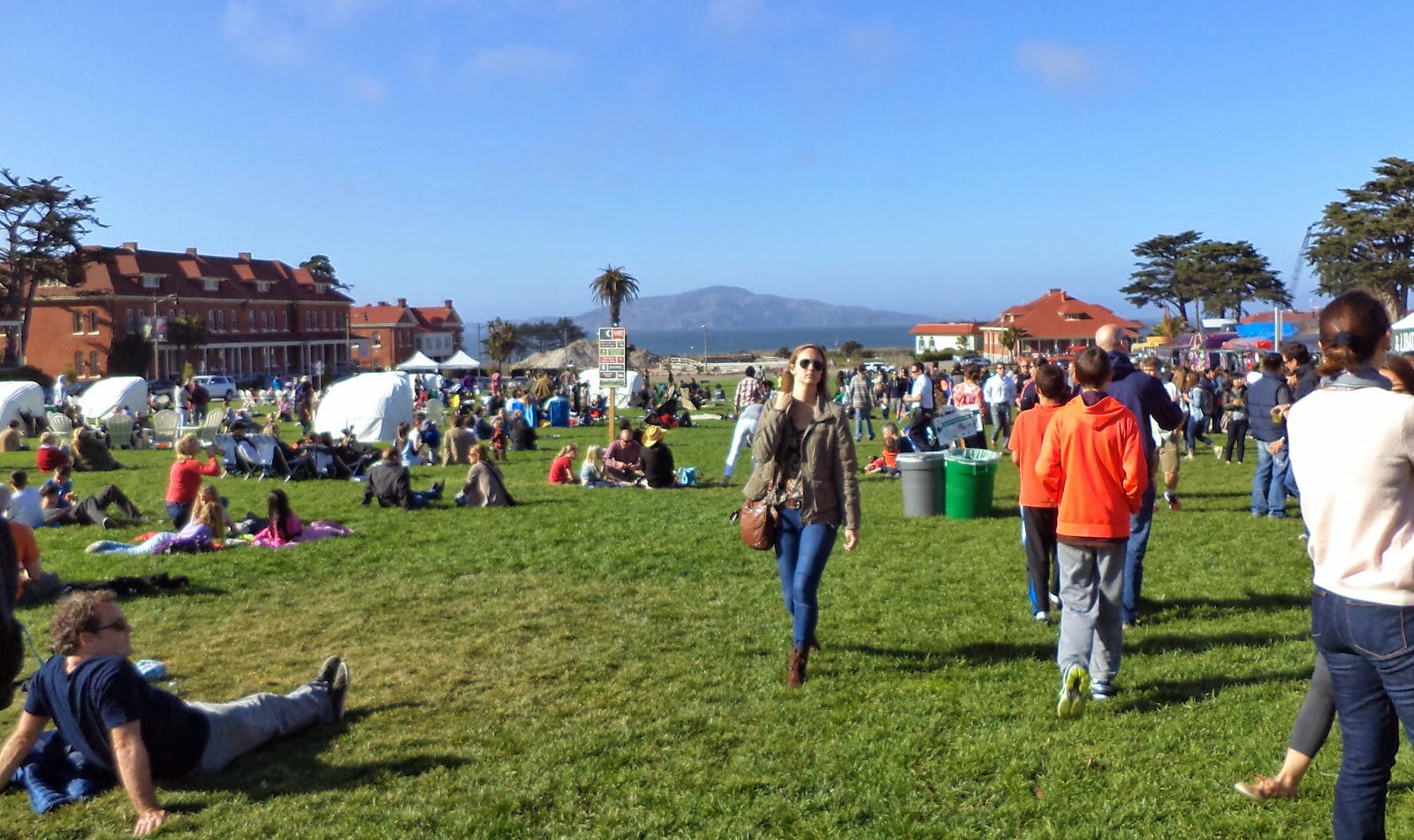 Early Off the Grid crowd 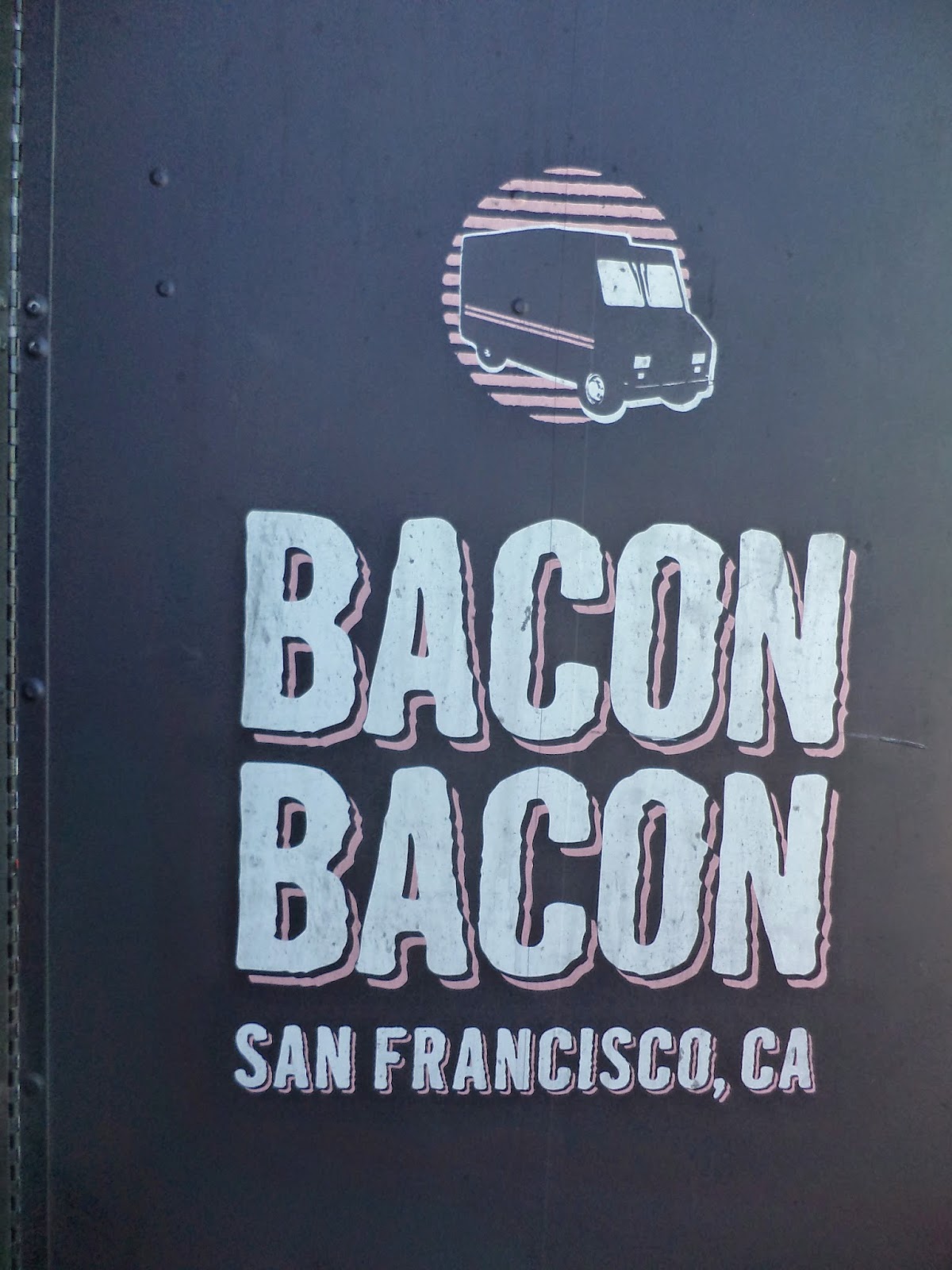 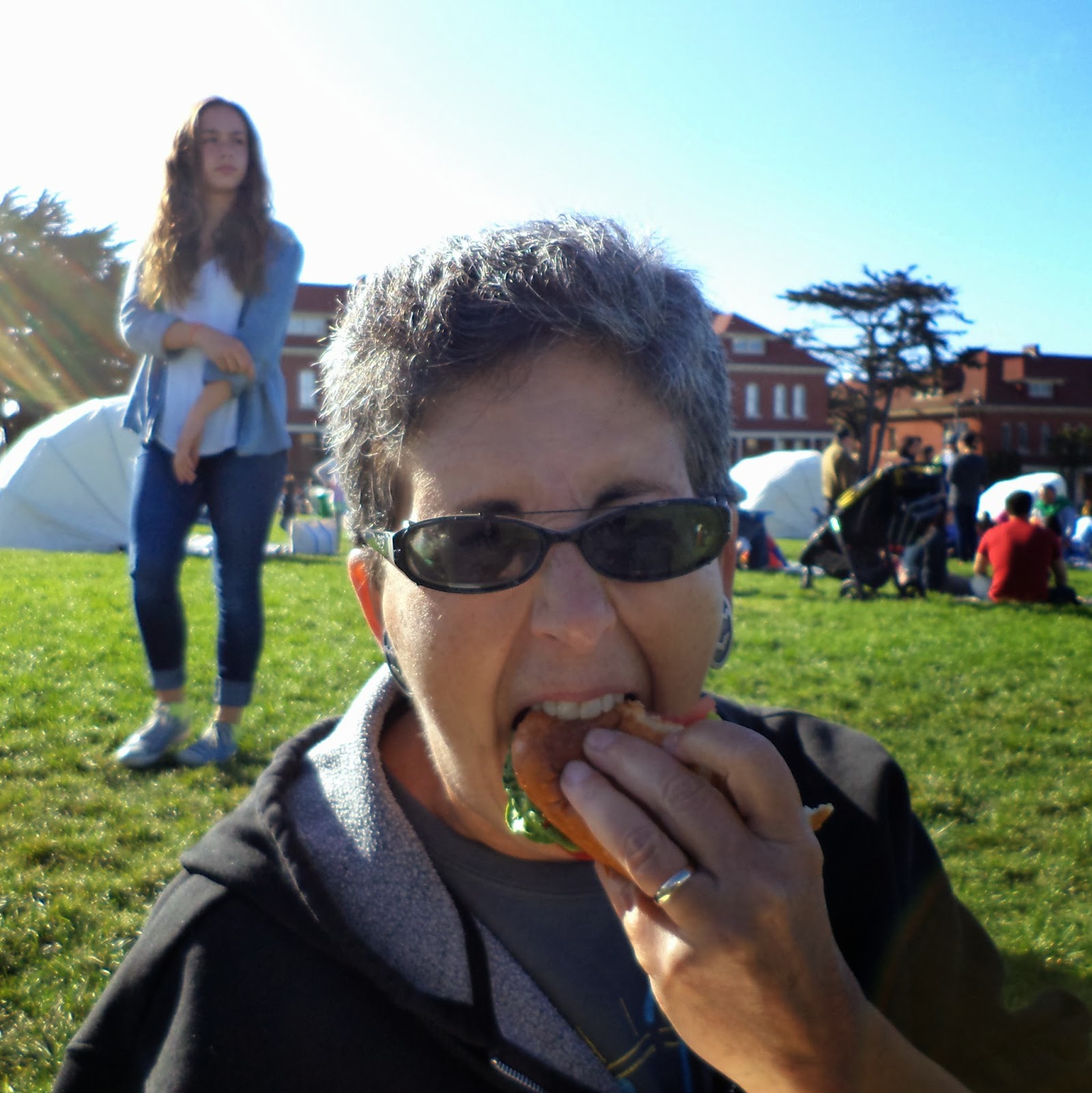 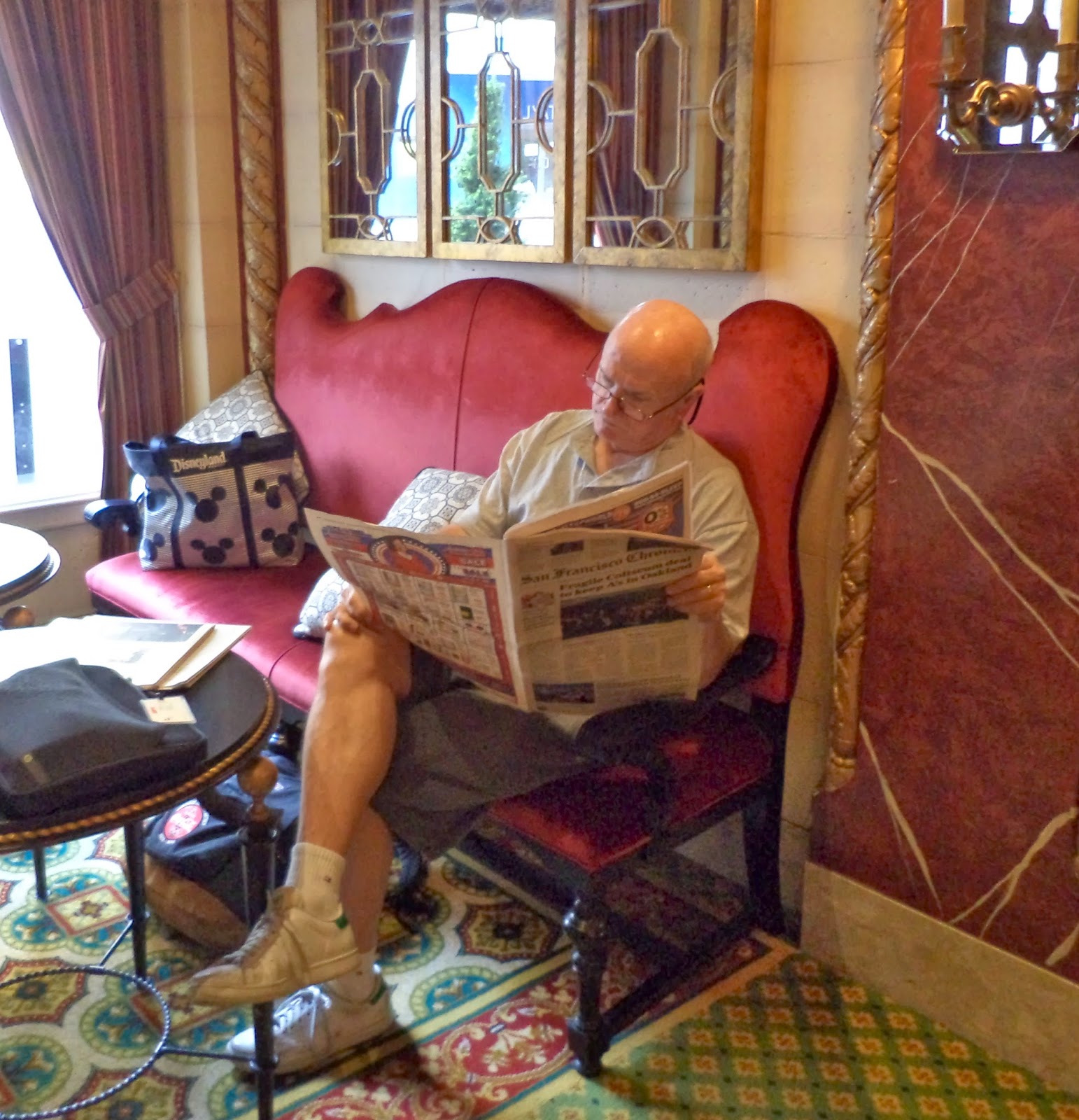 July 4th: Waiting for the 7AM shuttle to SFO