Libyan Music Across The Generations: The Story Of DADA And Dado 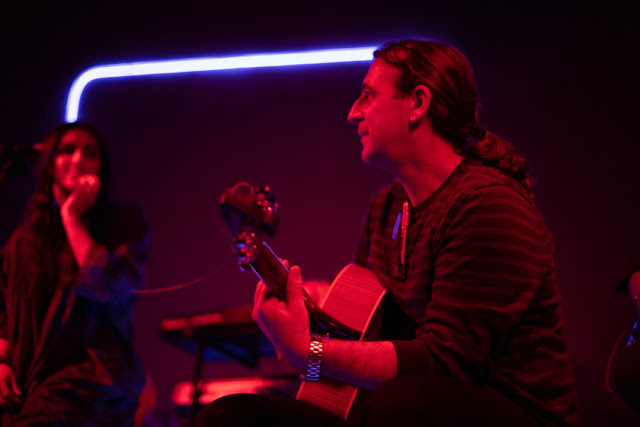 Music occupies an important role in the cultural landscape of Libya. A variety of different genres were and still are performed by many artists; the late 70s and early 80s periods were marked by several singers such as Ahmed Fakroun. He left a mark on Libya’s music style as well as on other artists like Hamid Shaari and Shab Gilani in the 90s and early 2000s. Music has been shaped by numerous events and in spite of how quiet the art scene had been before 2011, it was that very year which proved as a wakeup call for art in Libya once again.

Libya has seen a remarkable revival of the music scene, fuelled by the passion and creativity of a younger generation of musicians, which includes both female and male artists. This generation is benefitting from the insights and expertise of their more experienced peers. This intergenerational exchange is epitomised by the collaboration between two Benghazi-based musicians, DADA and Dado.

DADA is a 25-year-old singer-songwriter who was born and raised in Benghazi. Although she has been singing for as long as she can remember, she officially became active in 2017. She learnt to play the guitar through YouTube tutorials and recently released her first professional track. DADA also works alongside fellow musician Debani at DO FM, a Benghazi-based radio station, where they broadcast the radio show ‘Music Fabric’ every Wednesday at 6pm.

When a mutual friend introduced her to the 47-year-old music producer, Jasmin Ikanovic (known as Dado), he was impressed by her powerful voice that he had heard so much about. They have now been jamming and recording music together for several years. Dado himself has been active since the early 2000s, specialising in rock and blues. He started producing music professionally in 2011 and has operated his own studio since 2012. DADA considers him to be her mentor who speaks her musical language.

Becoming a musician in Libya is certainly not without its challenges. DADA explains that although it is different for female artists, both men and women face difficulties. For women, however, there remains societal boundaries that they cannot overcome. Nonetheless, many people are supportive of female artists regardless of how hard it is.

DADA is no exception; she encountered problems when she released her first track this year. It was complicated, she admits, however, she does not care about what people think so long as her family supports her. She is unapologetic that making art is neither harmful nor bad. Dado is of the same opinion and fully supports her - and he is certainly not alone in doing so. There is a supportive community in Benghazi which has supported many emerging musicians and artists from different backgrounds.

According to Dado, before 2011 the music scene was not as noticeable, not so “alive.” Women were making music and art, but they faced severe restrictions. 2011 proved to be a watershed year during which many musicians stepped onto the scene. The situation - as in many other parts of Libya social and cultural life - then worsened meaning that women would once again struggle to perform in public. Or so DADA believes; Dado, despite everything thinks that it might has become easier for women to express themselves musically in recent years. Whatever the case, many artists simply disappeared citing the lack of support from part of society and an unbearable degree of pressure as the reasons for their stepping of the stage.

Dado feels that over the last couple of years there has been a shift in attitudes towards producing music in Libya. The conflict has affected people’s perspectives while social media has helped musicians spread their work. Some comments criticise artists choosing to sing at such a critical time for the country. But that raise the question, when is it the right time to make music sing in Libya?

Some distance away from the popularity that rap music is enjoying in Libya right now is the music that inspires DADA. Her music is deeply influenced by jazz, a genre of music for which she has a lifelong passion. But working with Dado over the years has helped her to develop a deeper understanding of his music: “Whenever you listen to Dado’s songs, you can differ them from other songs and you can feel his vibe.’’

His collaboration with DADA is just one of many – Dado is sure of it – the talent is there. He says he will try to help as many young artists find their feet as he can. DADA is also confident that Libya will soon be known for its wealth of young musical talent: “There are many opportunities here, but family and society hold them people back. It’s not the lack of opportunities but the societal pressure.’’ She is optimistic that this new generation of Libya musicians, both female and male, will find an audience in Libya and beyond.

Alhan Libiyya is a project which celebrates the music of Libya, past and present, and the rich diversity of music-making styles from across the country - to be enjoyed primarily by Libyans themselves. The project brings together aspiring Libyan musicians from different backgrounds to foster their creativity and produce a shared vision of Libyan music, in the form of videos, podcasts, and a unique compilation album.