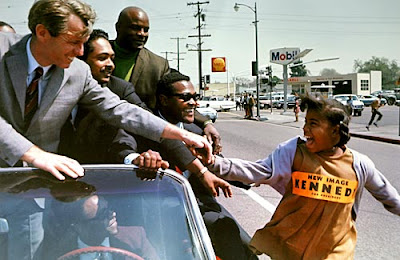 The Los Angeles Times put this photo on the front page of the California section 12/20/07, with a story about how the photographer, Howard Bingham, still hopes to identify the girl in gold after 39 years. (The Times says the dress is actually red.)

In point of fact, though, it was taken near 103rd Street and Central, in early June, 1968, days before the California primary and Robert Kennedy's assassination. State senator Mervyn Dymally and labor leader Ted Watkins are also in the picture.