On This Day In Typewriter History: Knees Up Father De Long

PART 226Do we need it? On this day (January 5) in 1892, a Canadian-born church minister, Allen Percy De Long, while based in Imlay City, Michigan, was granted a patent for this device: 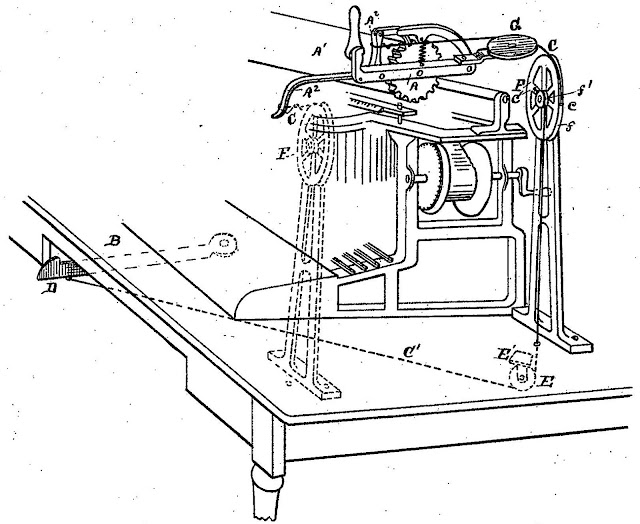 De Long described his "invention" as "a carriage and platen shifting attachment for type-writers, whereby the carriage may be drawn back into primary position and the platen rotated for spacing by mechanism co-acting to accomplish both results in a single operation. To these ends my invention consists of the combinations of devices and appliances hereinafter described and claimed, and illustrated in the accompanying drawing. The figure is a view in perspective, illustrating my invention applied in the two ways specified, the dotted lines showing the first position referred to. The desirability of providing a type-writer with mechanism whereby the carriage and the platen may be shifted at the end of each line without the necessity of taking the hands from the key-board for the purpose is evident, since the use of the hands to effect this result every time it is required causes very considerable delay. To overcome this necessity I have designed and applied to typewriters of different constructions an improved device operated by a laterally-moving knee shifting-lever so arranged that by a single movement of the knee the carriage is shifted to its primary position and the platen rotated to properly space the lines."
De Long was born in Ontario in April 1858. He died in Glendale, Los Angeles, where he moved in the late 1920s after holding positions in many parts of the US.