Movies are one of the tools that help us learn about many stories, event, people, and history. Through movies, we get the chance to learn many lessons and expand our imagination. We visit places and get to know characters that are sometimes not real but we get attached to some of them and they become part of our endless memories. It is amazing that we have the chance to watch movies in many languages and discover beyond the place we live in. We are transferred to a world that we are strangers in.
If you know me enough, you will know that I love documentaries. I love movies that are based on real-life stories. Stories about people who made a difference in this world. I always love to discover and watch those who were advocates of a certain cause. One of my favorites quotes is by Mahatma Gandhi ''Be the change you wish to see in this world'', I have known this quote from a very young age. It was one of the drivers that kept me going and it is always a reminder for me that as I change to the better, the world will be better. It is also a reminder that we are all capable of making a change, it doesn't have to be magnificent but a simple act of kindness, support, and love can help many people.
You don't have to start a major company or an organization to change the world. You can start small and help others in your community and develop yourself personally and professionally. Change begins from within and it is a daily experience to discover ourselves on top of everything in order for us to help change others and eventually the world to the better. 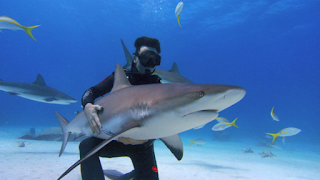 I have previously written about a movie that changed me and moved me to the core and it was ''Into the wild'' and it was about a man who gave up everything and decided to go back to nature and follow his dream of going to Alaska. That movie left a great impact on me and the fact that someone gave up all the materials of this world to go back to nature and reach his destination is quite dazzling and not so many can really understand his motives and intentions.
This time, I am going to write about other movies that left another impact on me and I will remember it forever. I watched the other a movie called ''Sharkwater Extension and it is about sharks and the illegal trading of their fins for food purposes. I picked this movie randomly without any expectations and it changed my perspectives greatly. 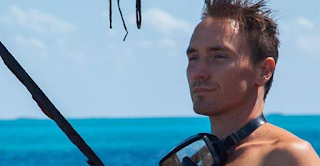 Rob StewartThe movie was directed by the Canadian filmmaker and ocean conservationist ''Rob Stewart''. He was an advocate for the environment and throughout his journey, he raised awareness about Sharks and put the illegal trade and fishing for their fins under the spotlight. Unfortunately, he died in 2017 in the age of 37 in a scuba diving incident while diving for saw sharks in Florida. The number of deaths caused by Sharks is 5 a year while 200 are caused by elephants only per year and still, sharks are still considered the most dangerous animals. It is the image sent by the media and movies made of sharks killing humans in the sea that spread this image among people and enlisted a fear inside of us that we need to stay away from them.
He gave so many lectures and speeches about the importance of our environment and even climate change. In one of the interviews he had, he said something that moved me personally and maybe it will move you too. He said ''if you look at the educational system, why we are taught Shakespeare and Algebra before we're taught conservation or we are taught how we survive on this planet. Especially if we know by mid-century that our survival is very much in jeopardy''.
We depend on the oceans to survive. We depend on life. It is the life that gives us our food, water, and air.'' He also said. He made sure to raise awareness in schools for children to show them the importance of our planet and that it is the task of this generation to survive our ecosystem that we depend on for survival but we still take for granted. Rob believed in saving our planet and he focused on one of the important elements of it and it is our oceans. I now see sharks differently and that they are not a threat once we know how to deal with them.
It is devastating/heart wrenching to see how much destruction we cause to our planet. Industrialization caused the exploitation of many resources in order to cover the growing demands of populations without taking into account the devastation we leave behind. It is quite cynical when we see natural disasters and countries express their concerns of the outcomes of these disasters when we should know better than these are the outcomes of our decisions and what we do to our ecosystem on a daily basis. We must think of everything we eat, use, how we throw things. We must pay attention to our actions in order to live in the balance because we are the ones causing imbalance to our world. I greatly advise you to watch this movie because it will definitely inspire you as it inspired me.