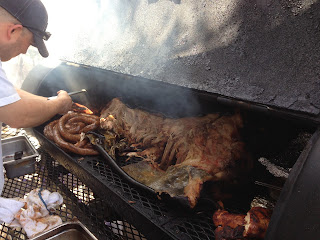 Smokin' pork!
As I’ve written elsewhere on this blog, Culver City was pretty much a ghost town when we moved here in 1998. Things really started to change, though, after chef Ben Ford opened his gastropub, Ford’s Filling Station. Suddenly we were hip! Not only did Ben, son of Harrison Ford, bring celebrity cred to our sleepy little town, but his food was fabulous. Soon lots of other high-end eateries were flocking here, making Culver City one of the culinary hubs of L.A. county.
Although we haven’t seen much of Ben lately, his restaurant remains an active part of the local scene. In fact, on Memorial Day his staff barbecued a whole pig on the front patio and served a prix fixe lunch, featuring a choice of two meats and two side dishes. As you can see, we couldn’t resist. 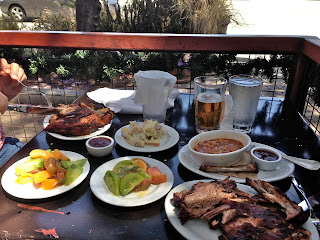 What a feast!
Between the two of us, we had enough ribs, chicken, brisket, tomatoes, potato salad, and beans to feed an army! Next year we’ll split an order, though we did make some outrageous tacos the next day out of our leftovers. Hmm hmm hmm!
P.S. I just found out that Ford’s is offering Big Daddy’s Summer BBQ the last Sunday of every month until Labor Day. Click here for details.