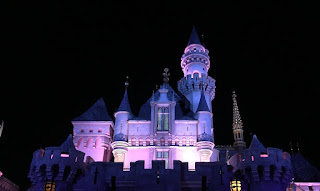 Sleeping Beauty Castle in pink and blue, just like the old days  When we were kids, it seemed like families visited Disneyland during the day, while evenings were just for adults and couples. In fact, the only time I remember going there after dark was "Grad Night," when I graduated from high school in 1971.

Taking advantage of the recent nostalgia craze for all things mid-20th-century, the resort has started a new series of evening events called "Disneyland After Dark"—named (I assume) after the 1962 World of Color episode where Walt showed us how much fun the park was at night. On TV, Annette Funicello sang on the Tomorrowland stage and Louie Armstrong played trumpet on the Mark Twain riverboat. All very exciting and magical.

This year's first "After Dark" event happened last Thursday and we, of course, were there. Marketed as "Throwback Nite," the evening promised to recreate, as much as possible, the early days of Disneyland, including original attraction posters and characters (the Blue Fairy!) and favorite 1950s/60s menu items, like mac & cheese, chicken pot pie, and dreamsicle beignets (gag!). They even staged "Fantasy in the Sky," the original 1958 fireworks show. Park visitors dressed in their dapper best—all petticoats and hats—and because it was a special ticket event, attendance was limited. Absolute heaven. 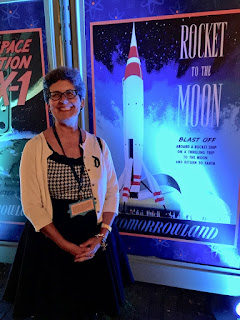 Plenty of photo ops in front of original attraction posters But the best part for us: just like the "Disneyland After Dark" TV show, music was everywhere! The Dapper Dans barbershop quartet sang a cappella on Main Street, a small club combo entertained riders on the Mark Twain, a pair of female DJs played 50s/60s rock-n-roll records throughout the park, and a swing band blasted out hot dance tunes in front of it's a small world. So we pretty much danced the entire night away. Every time we started to leave, we'd get pulled back in by a toe-tapping song. At 11PM, we finally made it to the Main Street train station, only to stop and dance to Jerry Lee Lewis's "Great Balls of Fire!" broadcast over the park speakers. As you can see below, a Disney photographer loved our impromptu jitterbug and went crazy taking pictures of us dancing. Oh, what a night! 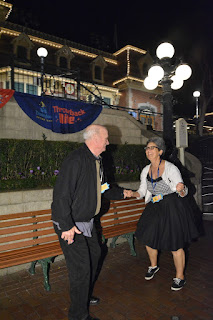 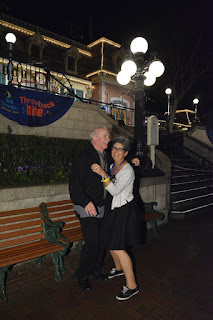 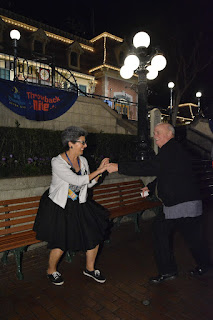 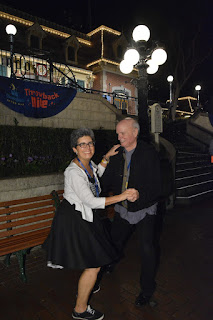 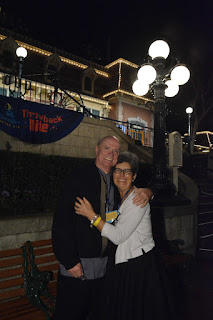 Excellent video of the night's festivities. You can (briefly) see usdancing 4.38 mins into the video.