Traditions And Customs Of Libyan Jews, Past And Present 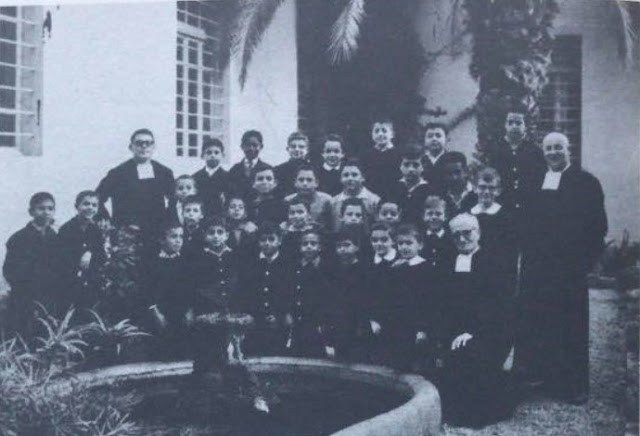 Source: From Libyan Twilight BookLibyan Jews had taken a major role in Libyan history in the early 1920s before they were deported to exile after 1967 as assumed. A lot of the Jewish traditions and signs are still rooted within the old city of Tripoli. Whether it is in terms of religious/politics or not, we cannot ignore their existence and that many of our traditions are somewhat inherited from them.


They were approximately about 49 thousand Jewish, 80% were originally Libyans and 20% were migrants from North Africa, Spain, and Italy. Libyan Jews were one of the main reasons for the development of trading and economy back in the days. They had their own shops and stores in the old city of Tripoli markets such as Fish Market and Al-Truk Market.
Last year, I wrote an article about Libyan Jews  titled ''The Denied History of Libyan Jews (Tripoli focused)'' as I am personally interested in knowing more about and I have an interest or let's say, curiosity to know what happened before 1969 when Gaddafi overthrew the king in a bloodless coup and took power under the name of Al-Fatah revolution which portrayed his vision of his obsession over control and oppression. Ever since the revolution in 2011, I started my journey of unfolding the past, I started to read, research and look for answers. As a Libyan citizen who was deprived of their own history, I thought that it was my mission to dig into the past and my blog is a source of answers for so many people in Libya. 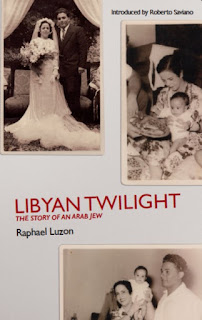 The article indicated above was in a way a gate for me to find those Jewish Libyans whom their parents and grandparents were sent to exile in 1967. I read a book which will always have a special place in my heart and this book is called ''Libyan Twilight: the story of an Arab jew'' by Raphael Luzon who is a Libyan Jew who went through exile in 1967 and in this book, he shared pictures and stories of the process of him moving out of his homeland and the journey to be able to come back again and to fight for the Jews right to come back to Libya.

I read this book on my way to Annecy, last December, it is a city located in southeastern France close to the Swizz boarder. The ride lasted for about 12 hours by bus and I could not let the book down because every detail mattered. I felt a mix of emotions and it was overwhelming in a good way but a little saddening!

A few months ago, I had this idea to know what Libyan Jews practice now as they still exist all over the world and after reaching out to a dear friend, we talked a lot about traditions and cultural practices and I knew that Libyan Jews still preserve the practices their ancestors once had when they were in Libya. After these months of preparation and long research, I am glad to bring out the final version of this piece. In this article, I hope to bring back all the memories of the shared traditions we have and make the connection stronger. 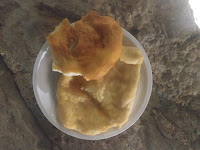 Sfenez dish (Libyan doughnut)1- Food is Everything!
On holidays, Libyan jews make a fried dish called Sfenez and it is a fried circled dough that can be filled with an egg and fried or fried plain and it is a very popular dish in Libya until today. and in Libya, there are special kushic where they sell Sfenez, especially on the weekends. Libyan Jews make it both sweet and savory and they have potato and egg fillings too.
There is a Jewish restaurant in Jaffa called Gueta that offers Tripolitanian authentic dishes like Massierre which is made of special pickled vegetables like peppers, radish, etc. Filfel Chuma, also spelled pilpelshuma which is the typical chili sauce of Libyan Jewish cuisine and it is also called pickled pepper. Also, they offer Mafrum and it is a traditional dish in Libya made of minced meat seasoned with local seasonings and offered in a sandwich. It is one of the most popular street food sandwiches and families make it as well as it is so easy to cook. There is also, the Libyan authentic couscous which differs from the Moroccon and Tunisian couscous and it is delicious. The name of the restaurant is a very common Jewish Libyan name. The dishes cooked in this restaurant are also served in the synagogue during the Shabbat ceremony every Saturday morning. 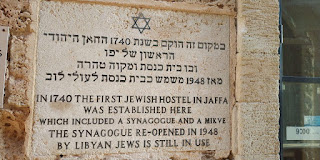 There is a synagogue for Benghazi Jews in Yafa, Tal Aviv. Rabi (means Sheikh) of this Knis is called Rabbi Khamous Falakh. It is for immigrated Libyan Jews from Benghazi. This synagogue was re-opened in 1948 by Libyan Jews and it is still in use. There is also a synagogue in Yafa for Jews from Tripoli. This community was established around 1950 in a synagogue dating to 1740, the rabbi of this synagogue is Rabbi Aharon Kahlon. There is the holiday of Passover which celebrates leaving Egypt from Pharaoh times with prophet Musa. It is also Spring/agricultural holiday. The first night of the month that Passover happens in, it is called Albasisa, or Albasisa night. it is a Libyan and Tunisian (Djerba) custom that may have roots in the temple in Jerusalem. 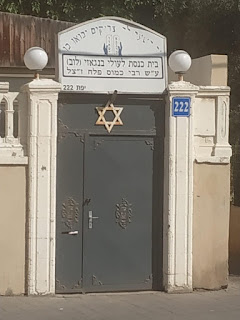 everyone gathers in the patriarch's home or in an important elderly person and the woman of the house prepares a dish from wheat flour, barley, sugar, and almonds or dates which is called Basisa and this is actually a signature dish Amazigh people in Libya make. The man of the house takes a key in his right hand, pours olive oil in the mixture and stirs it while saying a short prayer. There are many explanations around this but the main one is that on this day which marks the first of Nissan, the Mishkan was established and this custom refers to the temple services as they brought cakes made from wheat, sugar, and olive oil.

3- The holiday of Hanukkah
A Libyan custom is to eat special Libyan doughnuts or as we call them ''Sfenez'' and serve them to the students and teachers in religious schools as well as to elderly people. On the first day of this holiday, they would call up to the Towrah first the man who served throughout the whole year taking care of the synagogue as a mean of appreciation and thanking. The Kahin goes first, and this is a title given by birth, those descended from the family of Haroon Al-Rashid. There is another holiday celebrated by Jews called Purim but there is one for Jews from Tripoli and it is celebrated two months earlier and it is called Purim Ashrif. 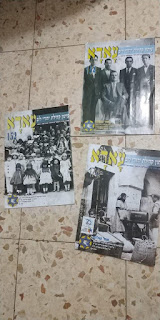 
This magazine is mostly available in the synagogue. In these magazines they share articles and news about Libyan customs and traditions from the past which are still preserved and what they used to do back in Libya, this magazine is still issued until today by a Libyan Jew editor and they still share traditional recipes in Hebrew. 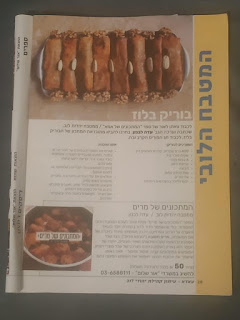 In addition, it is important to mention the difference between the Selihot prayers that Libyan and Tunisian Djerban jews say, and the ones that other jews from the Middle East and North Africa say, leading up to Rosh Hashana (New Year) and Yom Kippur.
The Libyan community has both a shorter and a longer version called Prayers (Salawat in Arabic and Hebrew). Salawat kbir and sghir. The short version is for Sunday Tuesday Wednesday and Friday. The long version for Monday and Thursday. Other middle eastern communities only had one version recited on all days of the week (except Shabbat).
On the right, a picture indicates the Burik recipe which is a traditional Libyan dish filled with minced meat (Mafrum) or mashed potatoes and these are called Mariam recipes.

Finally, I would like to give a big thank you to a dear friend of mine, Shmuel, who was the bridge of connection to know this information and know-how Libyan Jews live today, without his help and openness to answer my endless questions; I would not have known any of this information. Nevertheless, I hope you enjoyed reading this article, especially, my Libyan fellows who would truly understand many of these traditions and customs. Feel free to share your comments and thoughts below in the comments section.